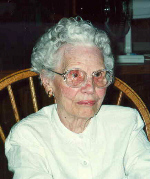 By: Ida H. Chipman and Jonathon J. Hardin Our mother, Doris Bell Hardin, 98, a resident of Plymouth’s Millers Merry Manor for the past two years, died of natural causes at 4:25 a.m. on Tuesday, March 26, 2002. Prior to moving to Millers, she lived at Marlou Place and spent 11 years in an attached wing at Eugene and Ida’s home on State Road 17. Visitation with her family and a celebration of her life will be from 10:00 to 11:00 a.m. on Wednesday, April 3, 2002, at the Johnson-Danielson Funeral Home, 1100 N. Michigan St., Plymouth. A memorial service at the funeral home will follow at 11:00 a.m. The Rev. Charles Krieg, pastor of the Pretty Lake Trinity United Methodist Church where she was a member, will officiate. A lover of nature, with a green thumb, Mother loved the springtime. It is appropriate that she departed this life at this time of the year. The first child of Douglas and Eva Richardson Bell, Mother was born in Norfolk, Virginia, on July 31, 1903. She graduated from Maury High School and attended Southern Seminary College for Young Women in Blacksburg, Virginia. On April 25, 1925, she and John J. (Jack) Hardin were married in Norfolk. Daddy died in November, 1969. During World War II, Mother took some bookkeeping courses and became manager of the Naval Officer’s Club in Norfolk, Virginia. A talented knitter, she later owned and operated a series of knitting shops. She constantly had knitting needles in her hands. At one time, she owned a shop in Plymouth, a city she learned to love and where, after retiring from her businesses in Virginia, she came to live in the early 1980s. She had a love of nature and all of its’ creatures. Mother could make anything grow; her flower box gardens were her joy. Every Mother’s Day, she and her granddaughter, Kelsey, planted her flowers. She loved wild birds and spent hours providing food and water for them and enjoying their company. She also always had at least one pet dog who was treated royally. Friends said that if there was another life, they wanted to come back as Mother’s dog. Mother was a shark at cards and could beat you most of the time at any game…poker, gin rummy and particularly duplicate and party bridge. She was a member of the Plymouth Duplicate Bridge Club until her eyesight began to seriously fail. She loved to read, especially mysteries. Most weeks she would check out 15 books from the library. Mother is survived by us, her two children: Jonathon and Mary Lou Hardin, Waynesville, N.C., and their son, Jon Hardin III, Atlanta, Ga., and Ida and Eugene Chipman, Plymouth, and our children and grandchildren who are: Susan and Ron Nichter and their children, Jared and Hannah, Greenfield, Ind.,; E. Nelson Chipman, Jr., and his children, “Chip” Chipman III, Mary Elizabeth and Maria, South Bend; Bryant M. Chipman and his children, Bryant Chipman Jr., Aaron and Christina, Plymouth; and Kelsey and Tom Flynn and their children, Katie, Thomas and Daniel Flynn, Plymouth. A number of nieces and nephews also survive. She was preceded in death by her parents, her husband and by three sisters: Ida Bell, Nancy Cutter Smith and Eleanor Bell Page and by one brother, Douglas M. Bell, Jr. An infant grandson and two infant great-grandchildren also have died before her. Mother was a compassionate lady, a fighter and a survivor. She loved to dance, to tell a good joke and to visit with friends. Her children and her grandchildren were the most important to her. She will be missed. Memorial gifts in her memory may be made to the Plymouth Public Library or the Marshall County Humane Society.