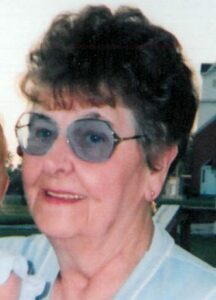 Doris C. Salmon, 87, of Waldron, Michigan passed away Friday, September 27, 2013, at her daughter’s home in Culver, Indiana surrounded by her loving family. She was born December 16, 1925, in Phoenix, Arizona the daughter of Edward Darcie and Guila Marie (Viers) Rutledge. She married Donald Salmon on February 13, 1943, in Pioneer, Ohio and he survives.
Doris was a life long Waldron area resident, graduate of Waldron High School Class of 1945, and lived the past seven years in Winona Lake, Indiana with her daughter. She was a member of the Waldron Wesleyan Church and dearly loved her children, grandchildren and will be greatly missed by all.
Surviving Doris besides her husband, Don of Culver, Indiana are two daughters, Treasure (James) Gilmer of Winona Lake, Indiana and Ramona (Randy) Lichtenbarger of Culver, Indiana; one son, Darcie (Bettie) Salmon of Wasilla, Alaska; two brothers, Larry (Judy) Rutledge of East Lyme, Connecticut and Bruce (Leah) Rutledge of Waldron, Michigan; one sister-in-law, Thelma Burgess of Ortonville, Michigan; ten grandchildren, twelve great grandchildren, five step grandchildren, eight step great grandchildren, numerous nieces and nephews. She was preceded in death by her parents, two brothers, Robert and Richard Rutledge, one sister, Nancy Tinney, one daughter-in-law, Theresa Salmon, one grandson, Jason Donavon Gilmer and one step great grandson, Casey Ochs. Funeral services for Doris will be Saturday, October 5, 2013, at 1:00 p.m.at Waldron Wesleyan Church with Rev. Tom Brodbeck and Pastor James Gilmer officiating. Interment will follow in Waldron Cemetery. Visitation will be Friday, from 5:00 p.m. – 8:00 p.m. at Waldron Wesleyan Church. Those planning an expression of sympathy may make memorial contributions to Waldron Wesleyan Church or charity of donor’s choice.