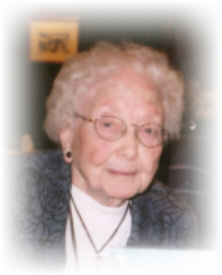 Longtime Argos High School educator, Doris E. Hindman passed away at her home on Friday, November 9, 2007. Doris died of natural causes at the age of 92. She always appreciated the Argos Community and the attention she received from colleagues and friends alike.
Doris was born in Viola, Illinois on October 31, 1915, the daughter of James Robert “J.R.” and Carrie (Black) Reynolds. She was raised in Rushville, Ill. and there graduated from high school. She received her higher education from Western Illinois University at Macomb where she had the distinction of interviewing the famed aviator; Amelia Earhart for a journalism class. She graduated with a teaching degree with a major in Biology and minor in English.
On July 7, 1943 in Seattle, Washington she married Clifford Stanley Hindman who was stationed there in the U.S. Army’s last Horse Cavalry Division.
After living for a period of time in Ohio the couple moved to Argos in 1957 and raised their two sons. Doris would first teach English at Talma High School with a total of 53 students. She went on to teach at Bourbon and retired in 1978 after many years of service at the Argos High School.
She was an honored member of Delta Kappa Gamma an international society of women educators and a member of the Indiana Retired Teachers Association.
Prior to the passing of her spouse on June 30, 1987 the couple enjoyed attending horse shows and traveling – especially when returning to the beautiful Northwest.
Doris enjoyed the company of many friends. She attended exercise class, working with Braille for the Blind, and watching many spectator sports; her favorite being that of Notre Dame.
With a great appreciation for literature, Doris was an avid reader and served many years on the Argos Library Board.
Her surviving family members are; her two sons: Richard R. and wife Rebecca Hindman of Fairmount, Ind. and Barry E. and wife Diane Hindman of Indianapolis, Ind. Eight grandchildren include: Cameron R. Hindman, Colin E. Hindman, Tyler A. Hindman, Monica Ottman, Lezley Hindman, Krystal Burlingame, Bobbie Jo Steidinger and Adam Buttry along with thirteen great-grandchildren.
Doris’ grandson; Christian S. Hindman and sister; Vivian Kuderna have also preceded her in death. Friends are invited to join the family to celebrate her life on Tuesday, November 13, 2007, from 2 – 4 p.m. in the Johnson-Danielson Funeral Home, 1100 N. Michigan St., Plymouth. A service will follow visitation at 4 p.m. in the funeral home with the Rev. Philip Platz, pastor of the Argos Bible Church, where Doris attended worship services.
Burial will be in the Rushville Cemetery at Rushville, Ill.
Memorial gifts in Doris’ memory may be given to the charity of the donor’s choice.