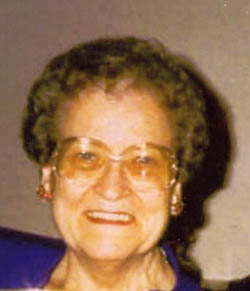 Doris I. Mueller, 90, passed into the arms of Jesus at 11:25 a.m. on Saturday March 17, 2018 at the Hospice House of Elkhart.
Doris was born in Grass Creek, Indiana on January 19, 1928 to Harry and Olive (Zeider) Shidler. Kewanna was her home from age 5 until moving to LaPaz to begin 5th grade. She graduated from LaPaz High School with the class of 1946.
She worked as a bookkeeper for I&M in South Bend. On March 27, 1948 in LaPaz, Doris married Robert Mueller, who survives. While Bob served in the Marine Corps in Korea from 1950-1951, Doris worked as a secretary at LaPaz High School.
A homemaker most of her life, Doris enjoyed raising her two sons, Lawrence and Robert. She spent several years making wedding cakes and mints. Later she catered parties and weddings. In her later years, she was known as the â€œjelly bean prayer ladyâ€. She was a member of the Calvary Baptist Church in LaPaz. There Doris was a secretary for several years, Sunday school teacher, superintendent and sang in the choir.
Doris is survived by her husband, Robert, and her two sons, Larry (Kristine) Mueller of Granger and Bob (Rebecca) Mueller of LaPaz; four grandchildren: Nathan (Katie), Jonathan (April), Eric (Sarah) and Ann (Mike Vidmar); and seven great-grandchildren: Isabella, Sofia, Lucas, Jacob, Benjamin, Kali and Gavin; and brother, Robert (Cleo) Shidler.
She was preceded in death by her parents and siblings: Harry, William and Margaret.
Visitation will be held on Wednesday March 21, 2018 from 1-3 p.m. in the Johnson-Danielson Funeral Home, 1100 N. Michigan Street, Plymouth. Funeral services will follow at 3 p.m. with Pastor Nathan Rettinger officiating.
Burial will be in the New Oak Hill Cemetery, Plymouth.
Memorial contributions can be made to Calvary Baptist Church, 330 Cortland Street, LaPaz, IN 46537 and Center for Hospice Care- Elkhart, 22579 Old US 20 E Elkhart, IN 46516.