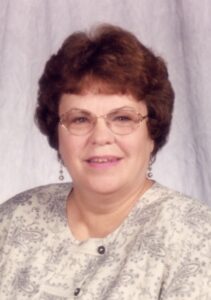 Doris J. Sheffer, 85, passed away peacefully surrounded by family on January 1, 2023, at St. Joseph Regional Medical Center in Mishawaka, IN. She moved to Donaldson, Indiana on October 11, 2022, into the Catherine Kasper Life Center.

Doris was born in Chicago, Illinois on December 4, 1937, to James and Anne (Smith) Gray. She graduated from Morton High School in Hammond.

On a double date, she would meet her soulmate, William G. “Bill” Sheffer. The two would be engaged 6 months after meeting on Thanksgiving and become one in Holy Matrimony on May 19, 1956, at St. Paul Church in Hammond.

Doris helped raise their three children in the home that Bill and she built from the ground up. She had a contagious laugh and enjoyed being in several clubs such as Bunko, church-related, and card clubs. She was an avid needle pointer and a doting grandmother.

She gave of her time doing meals for the homeless, church bake sales, and various other events held throughout her church and neighborhood. She was a faithful member of The Episcopal Church of St. John the Evangelist in Flossmoor, IL.

She was preceded in death by her husband Bill in 1993, her daughter Joan Sutherland and her parents.

A private burial will be held.

Memorial contributions can be made to the church.