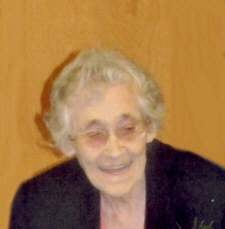 Doris L. Gambrel, 80, an Argos area resident since 1969, died at 4:00 a.m. on Tuesday, August 31, 2010, at her residence.
The daughter of Charles and Dora Smith Merida, Doris was born in Lancaster, Kentucky on December 2, 1929.
On December 28, 1946, Doris and John H. Gambrel were married in Pineville, Kentucky. He preceded her in death on July 11, 1990.
She had worked at United Technologies in Plymouth, where she was Chief Union Steward of IBEW #1976, retiring in 1995. She enjoyed working in her flower garden and being with her family, especially her grandchildren and great-grandchildren.
Doris is survived by three daughters: Cheryl (Gary) Duvall of Venice, Florida, Betty Beam of Etna Green and Pam (Jim) Ketcham of Plymouth; three sons: James Gambrel of LaPorte, Wallace (Tena) Gambrel of LaCrosse and John (Clarissa) Gambrel of Argos; 14 grandchildren; 25 great-grandchildren and one great-great-grandson.
Also surviving are three sisters: Ruby Ramsey of Hamilton, Ohio, Levora Ludwig of Mooresville, Indiana and Louise Harris of Irvine, Kentucky.
She was preceded in death by her husband, John; a daughter, Carol Stoneburner; two sons, Gerald Gambrel and Troy Gambrel and a granddaughter, Amanda Gambrel.
Doris’ family will welcome friends on Friday, September 3, 2010 from 5 to 8 p.m. in the Johnson-Danielson Funeral Home, 100 N. Michigan Street, Plymouth, Indiana. Funeral services will be held at 10:30 a.m. on Saturday in the funeral home. Burial will be in New Oakhill Cemetery, Plymouth, Indiana. Memorial contributions in Doris’ memory may be given to the Center for Hospice Care, 112 S. Center Street, Plymouth, Indiana or the Cancer Society of Marshall County, c/o 9739 Sunnyside Drive, Plymouth, Indiana.