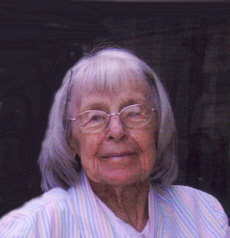 Doris May Rovenstine, 98, passed away at 12:10 a.m., of natural causes in the Miller’s Merry Manor, Plymouth. A former resident of the communities of Bourbon and Bremen, she has made her home for the past five years in the Miller’s Assisted Living Center in Plymouth.
She was born in Crawfordsville, Indiana the daughter of Jesse S. and Ethel E. (Campbell) Ward on August 7, 1912. She graduated from Crawfordsville High and then Indiana University – Bloomington with a Degree in Social Work. Following graduation she worked in Terre Haute, Indiana as a Social Worker.
On May 1st, 1937 in Lafayette, Indiana Doris became the bride of Clarence E. “Gene” Rovenstine who preceded her in death on January 9th, 2006. Together they enjoyed 68 years together and spent over 30 winters in various parts of Florida. Their passion was antiques, as dealers they bought, sold and traded at numerous shows in the Midwest and Florida. Doris was most fond of dolls, dishes and teapots.
A homemaker, Doris possessed a green thumb especially for African Violets. The couple enjoyed bridge, golfing and bowling and after Gene’s passing, Doris continued a most active life. She was known by her family to be adventurous, kind and gracious with a creative side and a gift for writing.
She is survived by three loving daughters and families. They are: Rosemary E. and Richard Stutzman of Crawfordsville and their children; Belinda Hartzler and Tod Stutzman. Rita A. and Roger Thayer of Argos, Indiana and their children; Robin Davidson, Pamelyn Eads and Jennifer Silva. Roberta J. and Steve Mann of Osceola, Indiana and their children; Michael Mann and Matthew Mann. Fourteen great grandchildren include: Lauren, Preston and Marlynne Stutzman, Audrey and A.J. Hartzler, Griffyn and Quentyn Carpenter, Braydon and Christin Davidson, and Caroline and Jake Eads, Natalie, Nicole and Nathan Mann.
She was preceded in death by her parents, spouse, a granddaughter Jill Carpenter and a great granddaughter Madelyn Eads.
Visitation will be held on Saturday, September 18th from 1 – 3 p.m. in the Johnson-Danielson Funeral Home, 1100 N. Michigan St., Plymouth. Funeral services will follow at 3 p.m. in the funeral home with Rev. Ken Walker of the Argos United Methodist Church officiating. Burial will follow in the Bremen Cemetery.
Preferred are memorial gifts in Doris’ memory to The Jill Carpenter Memorial Scholarship Fund, c/o Marshall County Community Foundation, 2701 N. Michigan Street, Plymouth, Indiana 46563.