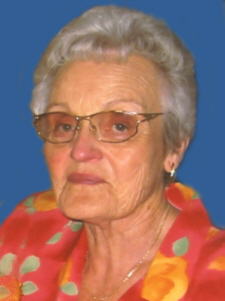 Doris Davenport Patterson, 85, died at 7:45 am on July 22, 2009 in Walkerton at the home of her son, Hal.
Doris was born at home on the family farm in North Township, Marshall County on February 9, 1924 to Foster Davenport and Ora Halt Davenport.
She graduated from Lapaz High School in 1941 and from Bethel College in 1968.
On June 10, 1941, Doris married Kenneth Patterson. Together, Doris and Ken farmed in Polk Township, raised three children, taught in the LaPorte school district, and enjoyed retirement together in Minong, Wisconsin and Avon Park, Florida until Kenneth’s death in 1993.
A devoted wife, a loving mother, and a dedicated elementary school teacher, Doris was also an accomplished and much appreciated cook. She enjoyed the outdoors including fishing at her beloved Horseshoe Lake and hunting mushrooms. Later in life, she enjoyed travel and golfing.
Doris is survived by her brother Foster (Joy) Davenport and her two sons and daughters-in-law: Hal and Denise Patterson of Walkerton, IN and Sam Patterson and Christine Lac of Northfield, MN. Seven grandchildren survive: Todd (Julie) Peterson of Remington, IN; Jeff (Eve) Patterson of Waukee, IA; Kevin Patterson and Tyler Patterson of Walkerton, IN; Andy (Francine) Patterson of Sterling, VA; April (Brian) Patterson Gallagher of Livermore, CA; and Parker Patterson of Northfield, MN. Also surviving are five step-grandchildren: Nicki Wasteney, Heidi Wasteney, Tammy Linback, Nathaniel Lee, and Gabrielle Lee; three great-grandchildren: Ashley and Blake Peterson, and Grace Gallagher; and one step-great-grandson Camden Linback.
She was preceded in death by her parents, her daughter Jane, her husband Kenneth, her brother Don Davenport, and by her step-sister Imogene McKesson.
Visitation will be held from 3:00 – 7:00 pm Sunday, July 26, in the Johnson-Danielson Funeral Home, 1100 N. Michigan Street, Plymouth.
Funeral services will be at 10:00 am Monday, July 27 at the funeral home, with visitation one hour before the service. Burial to follow at Morris Cemetery.
The family request in lieu of flowers memorial contributions may be made to The Center for Hospice and Palliative Care or to The American Cancer Society.