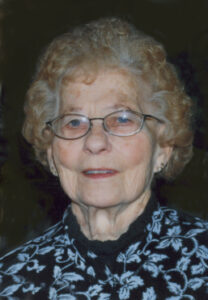 Doris Ruth Emmons, 85, of Neidlinger Garden Court, Plymouth, died at 1:30 a.m. Saturday, Nov. 13, in Memorial Hospital, South Bend, following a traffic accident in Marshall County on Friday evening.
Doris, a vibrant and talented woman who enjoyed taking care of the elderly with love and compassion, was born in Culver, Ind., on May 11, 1925. She was the daughter of Earl D. and Artie A. (Wooldridge) Zehner.
She lived in the area most of her life. She attended Argos High School, dropping out before graduation and in 1980, almost fifty years later, showing her determination to succeed, Doris earned her GED and then attended Ivy Tech, earning a Technical Degree.
On March 1, 1942, in Plymouth, Doris and Raymond L. Ringle were married. She then married Ward L. Emmons on March 10, 1961, in Walkerton who preceded her in death on February 17, 1998. For the past 18 years Floyd (John) Bottorff was Doris’ companion.
Doris was an active member of the Moose for over 50 years, the VFW, the American Legion and the Eagles lodges.
She loved to golf and was talented in embroidery, crocheting and sewing.
Surviving her death are two daughters and three sons. They are Jerry R. (Christine) Ringle, South Bend, IN.: Kerry G. Ringle, San Diego, CA.: Todd A. (Tina) Emmons: Rita A. (Rodney) DeBard, LaGro, IN. and Cindy S. (Bill) Rash, Plymouth, IN.
Nine grandchildren and four great-grandchildren survive as well, together with many friends and family.
Doris was preceded in death by her parents, her husbands, and siblings: Virginia Miller, Garland Zehner, Robert Zehner, and Gerald Zehner.
A time to share memories and visit with the family will be held from 2 to 4 & 6 to 8 p.m. on Tuesday November 16, 2010 with a Moose Auxiliary Memorial Service held at 8 p.m., at the Johnson-Danielson Funeral Home 1100 N. Michigan Street Plymouth, IN 46563.
Funeral services will be at the same location at 10 a.m. on Wednesday November 17, 2010 with the seniors pastor of Plymouth Wesleyan Church, Rev. Ed Friberg officiating. Burial will be in Oakhill Cemetery, Plymouth
Memorial gifts in Doris’ memory may be made to the Christina Pochert Ringle – Jerry R. Ringle Scholarship Fund c/o Dina Harris, IU South Bend, 1700 Mishawaka Ave., South Bend, IN 46634.
Funeral Director: Randall L. Danielson