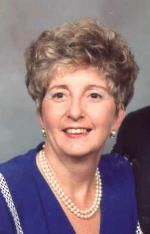 Lifelong Marshall County resident Dorothy L. “Dot” Sahlhoff, 56, of rural Walkerton, Ind., died at 10:57 a.m., on Thursday, November 8, 2001, at Hospice House, South Bend. Dot was born on April 19, 1945, in Plymouth. She was the daughter of Harry A. and Zulene F. Studebaker Hohman. She graduated from Bremen High School with the class of 1963 and earned an Associate degree from Ancilla College in 1993. She then received her Certificate in Accounting.
On April 4, 1964, in Plymouth, Dot and Leo W. Sahlhoff Jr. were married. She was employed at the Penn Harris Madison School Corporation in accounting for the past five years, having previously worked for eight years at Martin’s Chevrolet, Bremen. A member of the Calvary Lutheran Church in Plymouth, Dot served on the Board of Evangelism and was, among other positions, a former church treasurer. A former Polk Township 4-H leader, she enjoyed swimming, reading and collecting unique baskets. She was known for her great love for her family, especially her grandchildren. Dot is survived by her husband, Leo and their three daughters: Karmen K. and Chris Leeper, Bremen, April L. and James Schmidt, Winona Lake, Ind., and Rhonda S. and Dustin Davis, Mentone. Six grandchildren also survive. Two sisters, Patricia and Larry Cramer, Plymouth and Dora Jean and Rollie Allen, Odessa, Texas, and several nieces and nephews also survive. She was preceded in death by her parents, a twin brother, Dale L. Hohman and a son, Tony L. Sahlhoff. Friends may call at the Johnson-Danielson Funeral Home, 1100 N. Michigan St., Plymouth, on Sunday, Nov. 11, 2001, from 2 to 4 and 6 to 8 p.m. There will also be visitation for one hour at the church prior to the services on Monday. Funeral services will be in the Calvary Lutheran church, 1314 N. Michigan St. Plymouth, the Rev. Steven Resner, pastor will officiate on Monday, Nov. 12, 2001 at 11 a.m. Memorial gifts in Dot’s memory may be made to the Calvary Lutheran Church building fund.