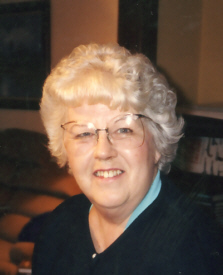 Dorothy Ann (Keilman) Carter, 83, a resident of Plymouth since 1976 coming from Portage, Ind. has died. Her passing came Sunday morning of natural causes in the Pilgrim Manor Nursing Home where she has been a patient the past two weeks. Dorothy has made her home at the Neidlinger Garden Court apartments in Plymouth the past six years. Always cheerful, there she enjoy many wonderful times with her neighbors singing together and playing card games.
Dorothy was born at home in Merrillville, Indiana on December 1, 1926 the daughter Henry M. and Anna (Labb) Keilman. She graduated from Merrillville High School in 1944.
On May 30, 1950 at Sts. Peter & Paul Catholic Church in Merrillville she became the bride of George A. Carter. He preceded in death on August 13, 1994.
She had worked as a secretary at Lew Wallace High School in Gary and then became devoted to being a homemaker and mother. Dorothy loved time spent with family especially her many grand and great grandchildren with their various activities. She also enjoyed reading. Devoted to her Roman Catholic Faith she was a member of St. Michael Church in Plymouth and its seniors group – Harvest House. She volunteered in the gift shops of the church and St. Joseph Regional Medical Center – Plymouth.
Dorothy’s children include: Marianne T. Brown of South Haven, Mich., Colleen F. (Stephen) Lindsey and Dennis M. (Mary) Carter of Plymouth, John A. (Kathleen) Carter of North Liberty, Josephine A. Taylor of Rochester and Andrew G. (Sue) Carter of Dayton, Ohio.
Her eighteen grandchildren are: Heather Summers, Geoffrey Whitaker, Robert Brown, Michael Brown, Emily Carter, Lindsey Carter, Jonathon Carter, Mary Jane Wojcik, Ryan Wojcik, Matthew Wojcik, Jeffery Wojcik, Elizabeth Wojcik, Bradley Carter, Johnny Carter, Michael Carter, Caroline Carter, Michael Shepard and Sarah Shepard along with seven great-grandchildren.
Also surviving are two sisters: Mary Margaret Antczak of Crown Point and Ruth Kacmar of Portage along with numerous nieces and nephews.
Dorothy was preceded in death by grandchildren; Katie Carter and Joseph Brown, great grandson; JeffreyWhitaker, son-in-law; Scott Shepard, sisters; Helen Mattes and Rita Mann and brothers; Jerome, Thomas and John Keilman.
Friends and family will gather at the Johnson-Danielson Funeral Home, 1100 N. Michigan St., Plymouth from 4 – 7 p.m.(EDT) on Wednesday, January 27th where a Rosary will be said at 7 p.m. Calling will continue with prayers on Thursday after 10 a.m. and Mass of Christian Burial will be held in the St. Michael Catholic Church, 613 N. Center St., Plymouth at 11 a.m. (EDT) The Rev. Fr. William Kummer will be the celebrant.
Burial will follow in the Oakhill Cemetery, Plymouth. Memorial gifts may be made in her memory to the Marshall County Right to Life c/o the funeral home.