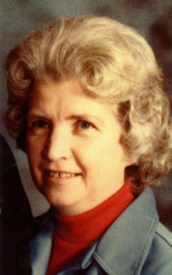 Dorothy A. (Mr. Glen) Johnson, 86, now residing in Michigan, passed away Saturday morning near Port Huron.
Born in Grovertown, Indiana on December 25, 1927, Dorothy was the daughter of Earnest and Olive Ketcham.
She was married to Rev. Glen R. Johnson for 68 years. He went home to be with his Lord on October 19, 2011.
Before leaving in 1961 for the mission field, she worked at Karns Grocery Store in Tyner, Indiana. They were missionaries to Mexico, Brazil, Peru and Alaska. In Alaska, she worked in Soldotna, Sunshine Day Care for 20 years. The couple lived in Alaska from 1969- 2011.
Dorothy enjoyed gardening and camping with family and friends. She enjoyed reading and cooking. She lived with her son and his family in Fort Gratiot, Michigan, until the time of her passing.
She is survived by their son, Johnnie R. (Mary Ann) Johnson and their children: Alicia Easton of Raleigh, N.C., Angie (William) Faber of Grand Rapids, MI, and Chad (Kelly) Johnson. Great-grandchildren are: Ashley, Gabe, Andrew and Andre’ Easton, Faith and Anna Faber, and Courtney, Jeremy and Wesley Johnson. Dorothy is also survived by numerous nieces and nephews.
Dorothy was preceded in death by her husband and her brothers and sisters: Betty Jean Dilts, Helen Marie Ross, Bernice Bottorss, Hazel Lehiy, Earnest Ketcham, Mary Alicia Sumpter, Frances Weldy and Richard Ketcham.
Visitation will be held on Friday, October 24, 2014 from 11 a.m. – 1 p.m. in the Johnson-Danielson Funeral Home, 1100 N. Michigan Street, Plymouth, Indiana. Funeral services will immediately follow in the funeral home at 1 p.m., officiated by Dorothy’s son, Rev. Johnnie Johnson.
Burial will be in the Morris Cemetery, on U.S. 6, west of LaPaz, Indiana.