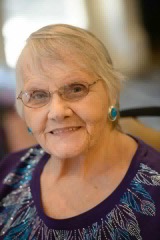 Dorothy Ann Sims, 87, died Monday, August 20, 2018 at Green Valley Healthcare & Rehabilitation Center in North Richland Hills, Texas after a long battle with Alzheimerâ€™s Disease. She is survived by her sister Marilyn Panak; daughters, Micki (Wagner) Kennedy, Teresa (Wagner) Greenleaf, Stacy (Wagner) McQuivey; six grandchildren; and eight great-grandchildren. Preceding her in death were her first husband Frank Wagner and her second husband Grady Sims. Dorothy was born September 22, 1930 in Plymouth, Indiana to Edmond and Grace (Kapshandy) Englehardt. She graduated as valedictorian of the Plymouth High School class of 1948. After high school, she met Frank Wagner at the Pretty Lake Church dance and married in December 1949. Dorothy loved to sew, craft and crochet. She was active in the â€œFat Ladies Clubâ€, Home Economics Club, 4H, and the Pretty Lake United Methodist Church throughout her time in Indiana. They retired to Manvel, Texas in 1981; she was widowed by Frank in July 1989. Dorothy met Grady Sims at Walmart and were married at the Northgate United Methodist Church (NUMC) in Irving, Texas in March 1992. They resided in Bedford, Texas. Grady and Dorothy were active members of the NUMC community, Clothes Closet and Food Pantry programs. She was widowed by Grady in May 2017. Dorothy donated her body to the UT Southwestern Medical Center Willed Body Program for medical research. She will be cremated by the Willed Body Program and then buried with Frank Wagner at the Oak Hill Cemetery in Plymouth, Indiana at a later date.