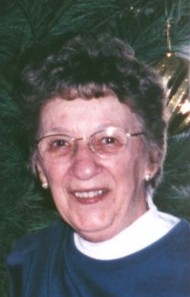 Dorothy C. Fehrer, 75, living on Lawrence Lake Drive, died from complications from cancer in Saint Joseph Regional Medical Center, South Bend, at 1:40 a.m. on Monday, December 11, 2006.
Dorothy had lived in Plymouth since 1967, coming from Port Washington, Wisconsin.
She was born the daughter of Clarence J. and Marie Ryer Schanen in Port Washington, on September 30, 1931. She attended Catholic grammar school and graduated from Port Washington High School as the salutatorian with the class of 1949.
In 1952, she graduated from St. Mary’s Nursing School at the University of Wisconsin in Madison.
On September 19, 1953, in Madison, Dorothy and Dalton A. “Dalt” Fehrer were married.
As a registered nurse, Dorothy was known to care for her patients with a sweet demeanor and did so from the time she graduated until her retirement in 1996. Her last and yet favorite position was that of Director of Nursing at the Catherine Kasper Home, Donaldson, Indiana, for a period of ten years.
She was a member of the Indiana Nursing Association and enjoyed attending the local A.A.R.P. meetings.
Dorothy loved flower and vegetable gardening, was an avid reader and enjoyed working crossword puzzles. She crocheted, and was an accomplished seamstress, who skillfully crafted all kinds of items.
Foremost in her life were her church and family. She loved following her children and grandchildren’s many activities.
She and Dalt are the parents to three daughters, two sons and their families.
Daughters are: Sherry A. and Gary Watkins of Newark, Delaware and their children: Michael, Adam, Christopher and Elizabeth: Mary Pat and Jay Kubina Jr. of Morris, Illinois, and their children: Tanya, E.J., and Evan: and Kris M. and Doug Pedler of Wakarusa, Indiana, and their children: Cassidy, Katlyn and Jeffrey Scott.
Sons are: Dalton A. “Skip” Fehrer, Jr. who preceded his mother in death on December 18, 1997. His children are Nicholas, Timothy and Samuel: and David S. and Carol Fehrer of Plymouth and daughter, Nikki Rumpler. Dorothy’s families also include four great-grandchildren. Her mother, formerly of Port Washington also resides in Plymouth. A sister-in-law, Cecilia Schanen of Random Lake, Wisconsin along with two nieces and a nephew survive as well.
Dorothy was preceded in death by her father, son Skip and a brother, Robert Schanen.
Friends are invited to celebrate her life and share memories with family on Thursday, December 14, 2006, from 4 to 8 p.m. at the Johnson-Danielson Funeral Home, 1100 N. Michigan St., Plymouth. A rosary will be prayed that evening at 7:30 p.m. Calling will continue after 7 a.m. on Friday, December 15, 2006 in the funeral home.
A Mass of Christian Burial will be held at 10 a.m. on Friday, December 15, 2006, in St. Michael’s Roman Catholic Church, 625 N. Center St., Plymouth, where Dorothy was a faithful member. The Rev. Father William Kummer will officiate.
Interment will be in St. Michael’s Cemetery, Plymouth.
Memorial gifts in Dorothy’s name may be made to the Catherine Kasper Home, P.O. Box 1, Donaldson, Indiana, 46513.