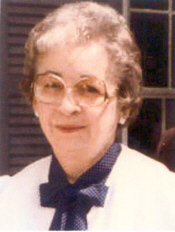 Dorothy DeMont, 87, formerly of 2211 Hillcrest Ave., died of natural causes, at 12:50 a.m. on Thursday, November 6, 2003, in Pilgrim Manor, 222 Parkview Ave., Plymouth.
Born in Plymouth on August 11, 1916, Dorothy was the daughter of Albert and Dora Scheetz Furry. She graduated from Plymouth’s Lincoln High School with the class of 1934.
On April 28, 1940, in Plymouth, Dorothy and George B. DeMont were married. George died three years ago on October 31, 2000.
A housewife and mother, Dorothy lived in Plymouth her whole life. She enjoyed sewing and had an extensive post card collection.
A member of Trinity United Methodist Church, Dorothy was a Yellowstone Homemaker Club member for many years.
She is survived by three children and their spouses: two sons and a daughter. They are Edwin G. and Sharon DeMont, Plymouth; Eugene and Margo DeMont, South Bend and Suzanne and Mark Umbaugh, Argos.
Nine grandchildren: Gwen Calvert, Jennifer Kingston, Brandan, Michael, Daniel and Christopher DeMont and Jeffrey, Jeremy, and Joshua Umbaugh survive as well, together with five great-grandchildren and three sisters; Helen Meeker, Florida, Margaret Irwin, Donaldson, Indiana, Marian Hileman, Plymouth, Indiana.
Dorothy was preceded in death by her parents, her husband, and a brother Anthony Furry.
A celebration of Dorothy’s life will be held from 4 to 8 p.m. on Monday, November 10, 2003, in the Johnson-Danielson Funeral Home, 1100 N. Michigan St., Plymouth.
Funeral services, officiated by the Rev. William Kaster, pastor of the Trinity United Methodist Church, will be in the funeral home on Tuesday, November 11, 2003, at 10:00 a.m. Burial will be in New Oakhill Cemetery, Plymouth.
Memorial gifts may be made to the Trinity United Methodist Church or to her grandson, Jeremy Umbaugh’s mission work, World Gospel Mission, Marion, Indiana.