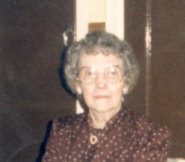 Dorothy F. Tomlinson, residing at Pilgrim Manor, 222 Parkview Drive, since January of 2001, formerly of N. Plum St., Plymouth, died of natural causes at 7:50 a.m. on Tuesday, February 17, 2004. She was 95 years old.
Born in Chicago, Ill., on January 19, 1909, she was the daughter of George E. and Edna M. Stevens Taylor. She graduated from Flower Technical High School in Chicago.
In the month of January in 1930, Dorothy and William “Harvey” Tomlinson were married in Illinois. Harvey died on December 18, 1973.
Dorothy had worked at Murphy’s Five and Dime store in downtown Plymouth. A homemaker and lifetime caregiver for various family members, including her grandchildren and great-grandchildren.
She had an outstanding reputation for her baking and Dorothy’s back door was always open to serve the neighborhood children cookies.
Instrumental in the formation of Christ’s Church in Plymouth, she was a long-time devoted member and ready to serve where needed. Dorothy is survived by a daughter Betty L. Shock Snay and her husband Jack of Plymouth.
Three grandsons: Roddy L. and Debbie Shock, Houghton Lake, Michigan; Denny C. Shock, Plymouth, and Art and Dawn Snay, Bourbon, also survive, together with a granddaughter, Penny L. and Rick Dixon, Plymouth.
Nine great-grandchildren, five great-great grandchildren and numerous step-great grandchildren, survive as well.
The great-grandchildren are: Chad Shock, Kelly Trott, Melinda Shock, Kyle Shock, Becky Blosser, Adam Shock, Eric Shafer, Steven Snay and Griffin Snay.
Three sisters also survive. They are: Marge and Bud Bossard, Lansing, Ill.; Helen Ferree, Monee, Ill.; and Florence Strombeck, Mishawaka, Ind.
Dorothy was preceded in death by her parents, her husband and two brothers: Harold and Marshall Taylor.
A gathering of friends and family to celebrate her life will be from 10:30 to 11 a.m. on Friday, February 20, 2004, in the New Oakhill Cemetery Chapel, Plymouth.
Funeral services will follow visitation at 11 a.m. in the chapel. Interment will be in the New Oakhill Cemetery.
Gifts to celebrate the life of Dorothy Tomlinson may be made to Christ Church, 12012 Old U.S. 31 South, Plymouth.