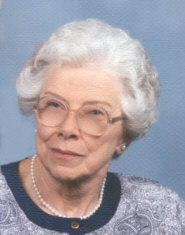 Community leader and teacher, Dorothy Gene Huff, 88, formerly of 120 South Liberty St., Plymouth, died of natural causes in Plymouth’s Miller’s Merry Manor at 12:05 p.m. on Tuesday, November 2, 2004.
Born in Wheatland, Ind., on March 11, 1916, she was the daughter of Richard Frederick and Emma Jane Zimmerman Ringham. Her father was a school principal and later a superintendent of schools. Her mother was a former elementary teacher.
Dorothy attended public schools in Brook and LaPorte, Ind., and graduated from Bloomington High School in 1933. She received a Bachelor of Arts from Indiana University in 1937 and taught English, Latin and World History in both junior and senior high schools for 18 1/2 years, 16 1/2 in Marshall County public schools. She did homebound teaching for almost 6 years as part of the school system. She also taught English to non-English speaking people under Adult Education.
On March 8, 1942, in Geneva, Ind., Dorothy married her college sweetheart, Tom R Huff. For four years, 1942 to 1946, she was a military wife while Tom served with the Army Air Force. After the war, they returned to Plymouth where he practiced law and later was elected the Judge of the Marshall Circuit Court. Married for 57 years, Judge Huff died on July 15, 1999.
Dorothy was a past Worthy Matron and member of the Order of Eastern Star, the American Legion Auxiliary and the War Mothers. She was a past president of the United Methodist Women, the American Association of University Women and the Democratic Women’s Club.
She loved literature and history, devoting a lot of time to the family’s geneology. She and Tom traveled widely in the U.S. and Europe.
Dorothy is survived by her three sons and their families. They are Ralph “Rick” and Alice Huff, Plymouth, Ind.; Dale Thomas and Sue Huff, Floyds Knobs, Ind.; and Ross Kent Huff, Seattle, Wash. A sister-in-law, Evelyn Ringham of Boca Raton, Florida also survives.
8 grandchildren and one great-grandchild survive as well.
Dorothy was preceded in death by her parents, her husband and two brothers, infant William Owen Ringham and Richard Frederick Ringham, Jr.
A celebration of Dorothy’s life and service to others will be held from 4 to 8 p.m. on Friday, November 5, 2004, in the Johnson-Danielson Funeral Home, 1100 N. Michigan St., Plymouth and continue one hour prior to services in the church. An Eastern Star Memorial Service will be held at 7:45 p.m. Friday in the funeral home.
Funeral services will be at 11 a.m., Saturday, November 6, 2004, in the First United Methodist Church, 400 N. Michigan St., Plymouth. The Rev. Dr. Dean Fager, pastor of the church, will officiate.
Interment will be in New Oakhill Cemetery, Plymouth.
Memorial gifts in Dorothy’s memory may be made to the First United Methodist Church.