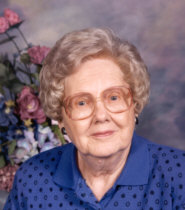 Lifetime Plymouth resident, Dorothy I. Lawrence, 89, formerly of Lawrence Lake, residing at 224 Eastwood for the past three years, died at 10 a.m. on Monday, March 29, 2004. She died of natural causes in the Kingston Memory Care Center, Fort Wayne, Ind.
Dorothy, a 1933 graduate of West High School, was born in Plymouth on April 24, 1914. She was the daughter of Thomas E. and May Walterhouse Taylor.
On May 9, 1935, in Plymouth, Dorothy and Willard J. Lawrence were married. Willard died on December 13, 1972.
From a humble beginning in 1949, Dorothy and her husband forged a living in the redi-mix concrete business. She served the now widely known and respected Transit-Mix Company as vice-president until her age of 80 and has remained on the Board of Directors. She loved the family business and was proud of the company and its’ growth, under the leadership of Will and Dixie Lawrence, now serving seven communities.
Dorothy, a doting grandmother, enjoyed her family, gardening and travel. A charming host, she enjoyed having guests in her home and was a quiet supporter of many community efforts.
A member of over 50 years, she was active in the Trinity United Methodist Church and served as a past president of the Mary and Martha Club.
Dorothy is survived by a daughter and a son. Her daughter is Joyce Lawrence, Huntertown, Ind., and her son and daughter-in-law, Will and Dixie Lawrence, Plymouth, Ind.
Mitchell Lawrence, her grandson of West Lafayette, Ind., and Tamara Hale, a step-granddaughter, Jeffersonville, Ind., and Kevin Pierce, a step-grandson, Culver, survive as well.
Three step-great-grandchildren also survive, together with a sister, Roma and Charles Jones, and three brothers, Ervin Taylor, Richard and Mary Taylor and Walter “Mike” and Irene Taylor, all of Plymouth, survive as well.
Dorothy was preceded in death by her parents, her spouse and a sister, Thelma Mertz.
Friends may call to share memories and to celebrate the life of Dorothy Lawrence with her family from 4 to 8 p.m. on Thursday, April 1, 2004, in the Johnson-Danielson Funeral Home, 1100 N. Michigan St., Plymouth. Additional visitation will be also for one hour prior to services in the church.
Funeral services for Dorothy will be in the Trinity United Methodist Church, 425 S. Michigan St., Plymouth, at 11 a.m. on Friday, April 2, 2004. The Rev. William Kaster, pastor of the church, will officiate.
Interment will be in New Oakhill Cemetery, Plymouth.
Memorial gifts in Dorothy’s memory may be made to the Heartland Home Healthcare & Hospice, 1513 Directors Row, Suite 210, Fort Wayne, Ind., 46808 or to the Trinity United Methodist Church.