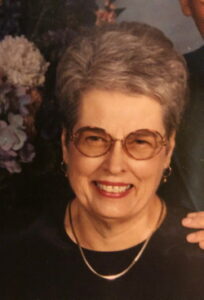 Dorothy Jean Butler (Kunkel), 90, passed away in her sleep at Catherine Kasper Life Center on January 5, 2021. Dorothy, or Dottie as she liked to be called, was born in Bartholomew county Indiana on July 11th, 1930 to Welmet (Wooley) Kunkel and David Ross Kunkel. Raised in Peru, Indiana on the family farm, she graduated from Peru high school in 1948. She attended Purdue University, and was a member of the Alpha Xi Delta sorority. While at Purdue, she met the love of her life, the late Henry Butler.

They married on December 17th, 1950, started life together on the Butler family farm in Inwood, Indiana and began raising their family, Nancy, David, and Michael.

Dottie was a loving wife, mother and homemaker who also worked side by side with her husband Henry to keep the books for Henry Butler Equipment Sales. During tax season she also worked for the CPA firm of Umbaugh and McQueen.

Dottie was very involved in the community through Tri Kappa, the Marshall County Republican Party and her membership in First United Methodist Church in Plymouth, which she joined after moving to Inwood with Henry. Her involvement in the church created many friendships that lasted a lifetime. As a woman of faith, she stayed engaged in growing spiritually and shared her faith through many volunteer hours at the church including teaching Sunday School, serving with the United Methodist Women’s group, and in many other ways. She and Henry also especially enjoyed hosting church picnic gatherings at their home on Olive Trail.

In the 1970’s she, along with Velma Butler and Linda Langfeldt, started The Sewing Nook, in downtown Plymouth, in which they sold fabric, sewing patterns, sewing machines, sewing accessories, and provided sewing classes.

Dottie served for years on the Plymouth Parkview Hospital Board including, for a time, as President of the Hospital Board. She also served as a member of the Saint Joseph Hospital board and was part of the team which was instrumental in the land purchase and building of the new Saint Joseph hospital in Plymouth.

After her “retirement”, she continued volunteering for the hospital auxiliary in both Plymouth IN, and Naples, FL. She was also a regular blood donor and was recognized by the Red Cross for giving over 12 gallons over the course of her life.

Dottie and Henry enjoyed their retirement by spending their winters in Naples, Florida, hosting family and friends. They also traveled extensively, both nationally and internationally, enjoying the adventure, new experiences and meeting and making new friends.

Dottie and Henry were long time Purdue University supporters, attending football and basketball games for many years. They were members of the John Purdue Club and the President’s Council and established several scholarships. They also sent their three children to Purdue University.

Dottie was preceded in death by her husband of almost seventy years Henry. She is survived by her three children: Nancy Fazzoni (Gregg) of Traverse City, MI, David of Bradenton FL, and Michael (Lesley) of Bonita Springs, FL. She has four grandchildren, Jason (Kristen) Fazzoni of Clarkston MI, David Fazzoni of Traverse City, MI. Daniel Butler of Fort Wayne, IN and Matthew Butler of Chicago IL and two great grandchildren, Simone Fazzoni, daughter of David, and Anthony, son of Jason and Kristen.

A memorial service will be held on Sunday, August 1, 2021 at 2 p.m. in the Johnson-Danielson Funeral Home, 1100 N. Michigan Street, Plymouth.

Memorial contributions can be made to the First United Methodist Church, 400 North Michigan Street, Plymouth, IN.