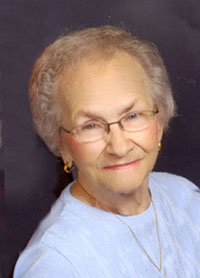 Dorothy M. Hayn, 86, passed away at 4:02 PM, Tuesday, July 7, 2015 at Pilgrim Manor. Lifetime Marshall County resident, Dorothy was born on September 21, 1928 in Marshall County to Harold L. and Blanche K. (Burget) Pontius. She attended Tyner High School where she graduated with her class in 1946. On January 18, 1947 in Osceola, Indiana, Dorothy became the loving bride of Paul D. Hayn. The couple soon welcomed into their lives six children: Earl, Deb, Cheryl, Ron, Dale and Michelle. Before she was married, she worked at Karn’s Grocery Store in Tyner, Indiana. After her and Paul took each other to be husband and wife, Dorothy took on the role of being the farm wife where she milked many cows. Dorothy was a member of the Pretty Lake Trinity United Methodist Church. She loved her family dearly, and would do anything for them. She loved to cook and make her specialty dishes for family gatherings including beef and noodles and pies. She also did a lot of traveling with Paul and spent seventeen winters in Florida. She is survived by her loving husband, Paul D. Hayn, and their children: Earl (Brenda) Hayn of Pelion, South Carolina, Deb (Dan) Martin of Plymouth, Indiana, Cheryl (Ron) Humes of Argos, Indiana, Ron (Julie) Hayn of Plymouth, Indiana, Dale (Laurie) Hayn of Plymouth, Indiana, and Michelle (Vince) Hoffman of Culver, Indiana, fourteen grandchildren and seventeen great- grandchildren. Also surviving are her five brothers, Don, Robert, Dick, Jim, and Kenny Pontius, and one sister, Esther Bradley. Dorothy was preceded in death by her parents, one son, two daughters, grandson; Paul Robert Hoffman, one brother; Lawrence Pontius, and one sister; Betty Schmeltz. Visitation will be from 3-6 PM Sunday, July 12, 2015, at Johnson-Danielson Funeral Home, 1100 North Michigan Street, Plymouth, and from 10:00 AM until time of service on Monday at the church.
Funeral services will be at 11:00 AM Monday, July 13, 2015 at Pretty Lake Trinity United Methodist Church, 8985 State Road 17, Plymouth, with Pastor Paul Nye officiating.
Burial will take place in New Oakhill Cemetery. Memorial contributions can be made to the Pretty Lake Trinity United Methodist Church, 8985 State Road 17, Plymouth, Indiana 46563 or to the Center for Hospice and Palliative Care, 112 South Center Street, Plymouth, Indiana 46563.