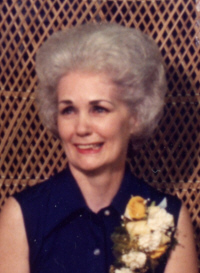 Dorothy M. Kelso, 87, passed away of natural causes in her home on Monday, September 15, 2014. Born in Chicago, Illinois in November of 1926, Dorothy was the daughter of LeRoy and Ruth (Reynolds) Nelson. After graduation from Calumet High School in Chicago, Dorothy did modeling in the area until she met her future husband, Robert C. Kelso. The couple married on January 18, 1947 at the Hope Evangelical Lutheran Church in Chicago, and to this union two children were born, Beverly and Edward. She was a great mother and cherished watching her children grow up. Robert would precede her in death in April of 1980. After her husband’s passing, she worked at Murphy’s/Ames in Plymouth until her retirement. She had a huge heart for animals and cherished being “Gran” to her grandkids and great-grandkids. She attended all their Plymouth sporting and music events. She also followed her hometown teams; da Bears, Cubs, Bulls and the Blackhawks. She was a member of the Calvary Lutheran Church in Plymouth. There she taught Sunday school, directed the choir, as well as, sang in the choir, and was a member of the braille workers who helped put together braille books to send overseas. Dorothy is survived by her daughter Beverly J. Brummett of Plymouth and her children, Robert Kyle (Desiree) Brummett and Angela Kathleen Brummett (Dave Kucera), and son Edward W. (Angie) Kelso of Plymouth and their children, Bryan Edward and Lauren Elizabeth Kelso. Also surviving are three great-grandkids, Isaac and Dara Brummett and Bailyn Kucera, as well as, her former son-in-law, Harry Brummett of DeBary, FL. She was preceded in death by her parents, her husband, and her brother and sister-in-law, Louis (Marion) Nelson. Visitation will be on Thursday, September 18, 2014 in the Calvary Lutheran Church, 1314 N. Michigan Street, from 4 – 7 p.m. Funeral services will be held in the church at 11:00 a.m. on Friday, September 19, 2014, officiated by Pastor K.C. Dehning. Visitation will resume one hour prior to the service in the church. Burial will be in the New Oakhill Cemetery. In lieu of flowers, memorial contributions can be made to the Humane Society of Marshall Co, PO Box 22, Plymouth, IN 46563 or to the Calvary Lutheran Church 1314 N. Michigan Street, Plymouth, IN 46563.