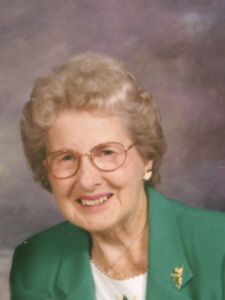 Dorothy M. (Roelke) Chase, died at her 625 Oakhill Avenue residence, on Thursday, December 21, 2006 at 6:30 a.m. of natural causes.
A lifelong resident of Marshall County she was born on December 4, 1917, in Teegarden, the daughter of James and Cora Brunner Roelke.
She graduated from Polk Township High School in 1934.
Dorothy and Neil Chase were high school sweethearts. While he was at Purdue, she graduated in 1935 from Nannette Beauty College in South Bend. She worked for a time in Robertson’s Department Store in South Bend as a beautician. Neil and Dorothy were married on February 21, 1940, in the Evangelical United Brethren Church in Teegarden. They briefly lived in Alabama and Indianapolis before moving to Culver, Teegarden, Plymouth and then back to Culver, where they enjoyed, with family and friends, the beautiful surroundings of Lake Maxinkuckee. The couple also enjoyed traveling with friends and spent eight winters in the Sebring, Florida area.
Neil and Dorothy owned and operated a milk route and then started what became Chase Leasing Corporation in 1955. Dorothy, always pleasant, served as secretary/treasurer of the family business for 35 years, retiring in 1990.
Formerly a member of the Teegarden E.U.B. Church, she was a 50-year member of the Plymouth Trinity United Methodist Church where she was past president of Mary-Martha Club and the United Methodist Women.
A past member of the Order of the Eastern Star, she was also a P.E.O, and a Tri Kappa member.
Dorothy is survived by Neil, her devoted husband of nearly 67 years and their two sons and twin daughters.
Their sons and families are: Larry N. and Sue Chase, Valrico, Florida, and Dan and Connie Chase, Euless, Texas. Their daughters and families are: Jeanine I. and Jerry Holderead, Marion, Indiana, and Jeanette E. Frick, of South Bend, Indiana.
Seven grandchildren survive and their families including five great-grandsons. They are: Barry and Linda Chase with sons; Peter, Graham and Benjamin; Doug and Ginny Chase with sons; Andrew and Ethan; Melinda Chase, Brad and Sabrina Frick; Alisha Frick; Lisa Holderead and Marc Holderead.
A sister, Helen Roelke Buss of Nappanee, Indiana, and two sisters-in-law: Norma Roelke of New Carlisle, Indiana, and Mary Roelke of Plymouth. Several nieces and nephews also survive.
Dorothy was preceded in death by three brothers: Milburn, Paul and Roy Roelke, and a brother-in-law Russell Buss.
Friends are invited to visit with the family and share their memories of Dorothy during her life as a wonderful wife, mother and friend.
Calling will be from 4 to 8 p.m. on Saturday, December 23, 2006, in the Johnson-Danielson Funeral Home, 1100 N. Michigan St., Plymouth, Indiana.
Funeral services for Dorothy will be held in the Trinity United Methodist Church, 425 S. Michigan St. Plymouth, on Sunday, December 24, 2006, at 2 p.m., with calling one hour prior to services. The Rev. William Kaster, and a cousin, Rev. Paul Nye, will officiate.
Burial will follow in New Oakhill Cemetery, Plymouth, Indiana.
Memorials in Dorothy’s name may be made to the Trinity United Methodist Church, Center for Hospice and Palliative Care, or the Donor’s Choice