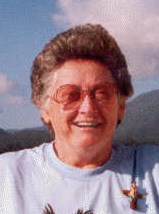 A celebration of the life of Dorothy R. Mather, will be held on Saturday June 20th at 11:30 a.m. in Lake of the Woods, Property Owners Association shelter located at 8745 North Shore Drive, Bremen. Lunch will be served.
Dorothy, a longtime educator, coach and counselor passed from this life on Feb, 9, 2015.
Her teaching career began at Washington Clay at South Bend and at Elwood High School north of Kokomo, she then began a 30 year career at Plymouth High School until her retirement in 1984. Dorothy was quite an avid Olympic supporter and attended several Olympics at home and abroad since 1960. Adding to her Olympic travels, she also visited Hawaii, Alaska, New Zealand, Mexico, and several Caribbean countries, traveled and camped the entire US.
She is survived by 10 nieces and nephews: Alyce McDonald (Paul) of Bremen, Martha Rohr of Lafayette, In., Nancy Helland of East Jordan, Mi., Shirley Mather of East Jordan, Mi., David Mather (Samantha) of Hawaii, Dr. John C. Mather (Jane) of Hyattsville, Md., Janet Purvis (Ralph) of Philadelphia, Pa., Linda Becker (John) of Orlando, Fl., Carolyn Miller (Dr. Stephen) of Lewisburg, W. Va., and Richard Bachmann (Allison) of Baltimore, Md., 17 great-nieces and nephews, and many great-great nieces and nephews. Dorothy will be greatly missed by all her family and friends.
Dorothy’s life can be honored by a memorial gift in her name to either: Plymouth Athletics, 1 Big Red Drive, Plymouth, IN 46563, Team U.S.A. c/o U.S. Olympic and Paralympic Foundation, 1 Olympic Plaza, Colorado Springs, CO 80909 or Special Olympics, 1133 19th Street NW, Washington, DC 20036.