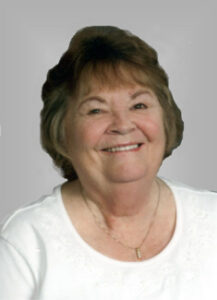 Dorothy “Dodie” Mae (MacInnis) Shafer, 69, of Plymouth, died unexpectedly of natural causes at her home Sunday evening, April 1st 2012.
Dodie was born in Nottingham, England on February 25, 1943. At the age of three, she came to Canada with her mother Dorothy Joan (Stevenson) MacInnis, who under the War Brides Act, married a Canadian Armed Forces soldier, Charles Lester MacInnis. They lived in Charlottetown on Prince Edward Island, Canada, until 1959 when the family moved to Plymouth, Indiana.
Dodie graduated from Plymouth High School in the Class of 1961. On August 13, 1993 in the U.S. District court house in South Bend, she took the oath to become a naturalized citizen of the United States. On June 13, 1964 she was united in marriage to Eldon D. Shafer in the church they both would be supportive members of for the next 50 years; Plymouth Church of the Brethren. It’s comforting to know that during this Holy Week she is in the hands of the Lord and the presence of all the family that have gone before her. She now awaits the reunion of those to come; to sit with her for a cup of tea. Whether it was her English heritage, or not, she simply loved a cup of tea. She dreamed about times spent on the water on Prince Edward Island and of Anne of Green Gables. She was also a great lover of her dogs over the years and an avid Notre Dame fan. Her enthusiastic cheering could be heard by many during football season.
Prior to her marriage, Dodie worked for Wagner Industries and then for 26 years as a cashier for the Plymouth High School cafeteria. She dearly loved interacting with her co-workers, the teachers, and the students.
Her husband Eldon survives with the three sons whom she loved very much. They will miss the talks they often shared on a wide array of topics–from current events to everyday life. Her first son, Dr. Mark Shafer, born April 16, 1966 and Dr. Elaine Shafer live in Edwardsburg, MI and gave her three wonderful grandchildren: Andrew, Benjamin, and Sarah. Her second son, Mr. Todd Shafer, born May 28, 1968 and Mrs. Pam Shafer live in Plymouth, IN and gave her two wonderful grandchildren: Nathanael and Marilla. Her third son, Mr. Jeffrey Shafer, born December 9, 1974 lives in South Bend, IN.
Her siblings include two brothers; Sinclair (Sue) MacInnis of Kingston, Ontario, Canada and Charles (Georgy) MacInnis of Houston, Texas and a sister (who is like a daughter); Beryl (Greg) Frenger of Holt, Michigan. Several cousins from Canada also survive, whom she loved very much and planned to see this summer. She was preceded in death by her parents and many close relatives from Prince Edward Island.
Visitation will be held on Thursday, April 5th from 4 – 8 p.m. in the Johnson-Danielson Funeral Home, 1100 N. Michigan St. Plymouth. Services will be held on Friday, April 6th at 11 a.m. in the Plymouth Church of the Brethren, 1130 N. Michigan St. Plymouth, where friends may call after 10 a.m. until time of services.
A graveside service will take place on Saturday, April 7th at 2 p.m. in the New Oakhill Cemetery on South Michigan St. Plymouth.
Memorial gifts may be made to the church or Plymouth High School “Helping Students Fund” for those students in need, which always greatly concerned Dodie. c/o Plymouth High School 1 Big Red Drive, Plymouth, IN 46563.