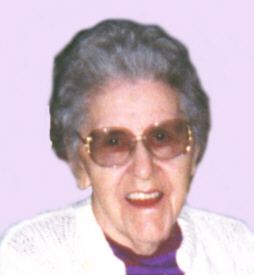 Dorothy Woolley, 89, a lifetime Marshall County resident, died of natural causes in Miller’s Merry Manor Plymouth, at 2:50 a.m. Monday, January 14, 2013.
Dorothy, the daughter of Ralph and Helena Fisher Birk, was born on March 16, 1923 in Lakeville. She attended Culver schools.
On Nov. 2, 1941, in Niles, Mich., Dorothy and Walter Woolley were married. Walter preceded her in death on June 24, 2002.
Dorothy had operated a Custom Upholstery Shop out of her home for many years
She enjoyed camping and was a former member of the Good Sam Camping Association and was also a former member of the Plymouth Moose Lodge, #741.
Dorothy is survived by two sons and daughters-in-law: Ronald E. and Carolyn Woolley and Terry L. and Mary Woolley and her daughter, Gloria and her husband Bill Espich, all of Plymouth, along with six grandchildren and seven great-grandchildren.
Also surviving are two sisters: Esther and Harry Paege of South Bend, and Norma Williams of Plymouth and a brother: Robert and Janette Birk of Roanne.
Dorothy was preceded in death by her parents, her husband, a sister: Eleanor Lowman, two brothers: Ralph Birk and Larry Birk and a granddaughter, Amanda Marie Woolley.
Visitation with the family to celebrate the life of Dorothy Woolley will be from 10:00 a.m. to 12:00 p.m. on Wednesday, January 16, 2013, in the Johnson-Danielson Funeral Home, 1100 N. Michigan St., Plymouth.
Funeral services in the funeral home will immediately follow visitation at 12:00 p.m.
Burial will be in New Oakhill Cemetery, Plymouth.
Memorial gifts in Dorothy’s name may be made to a charity of the donor’s choice