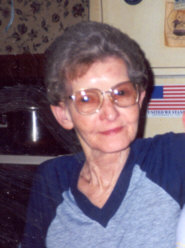 Dorthy M. Rulapaugh, 72, a resident of Plymouth since 1959, coming here from Farmington Hills, Mich., died of natural causes at her residence, 217 Pennsylvania Ave., Plymouth, at 7:38 a.m. on Sunday, February 15, 2004. She was born in Farmington Hills, Mich., on January 8, 1932, the daughter of Bert and Ethel Epling Clark. She graduated from Farmington Hills High School.
On August 25, 1950, at Walled Lake, Mich., Dorthy and Herbert H. “Red” Rulapaugh, Sr., were married. Red died on January 1, 1999.
Dorthy worked at United Technologies for 28 years. Most recently she had been an important worker in the delicatessen section at Martin’s Supermarket in Plymouth.
Martin’s employees celebrated her birthday last month with a surprise party.
She liked to do embroidery work and enjoyed feeding the squirrels. An accomplished flower gardener, Dorthy especially loved being with her family and friends.
Dorthy is survived by a son, Herbert H. “Rusty” Rulapaugh, Jr., Plymouth, Ind., and a daughter, Lavon D. Rulapaugh, Rochester, Ind.
A grandson, Seth Richard Rulapaugh, Raleigh, N.C., and four sisters and five brothers, also survive.
Her siblings are, sisters: Helen Schlusler, Howe, Mich.; Irene and Bill Aylesworth, Detroit, Mich.; Jennie and Tom Topper of Canton, Mich.; and Alice and Paul Harrison of Twining, Mich.
Her brothers are: Bert and Adela Clark of Garden City, Mich.; Ned and Josephine Clark of Howe, Mich.; George and Judy Clark of Espendido, Calif.; Gerald Clark of Farmington Hills, Mich.; and Richard and Norine Clark of Farmington Hills, Mich.
Dorthy was preceded in death by her parents, her husband and E.V. Clark, a brother.
Visitation in the Johnson-Danielson Funeral Home, 1100 N. Michigan St., Plymouth, Ind., will be from 4 to 7 p.m. on Friday, February 20, 2004.
Funeral services for Dorthy will be in the funeral home on Saturday afternoon, February 21, 2004, at 2 p.m.
Interment will be in New Oakhill Cemetery, Plymouth, Ind.
Memorial gifts in remembrance of Dorthy may be made to the Marshall County Hospice.