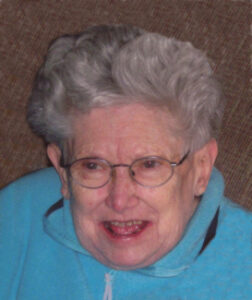 Dottus (Mrs. Buford) Benge, 83, and a Plymouth resident for the past 15 years, passed away at 2:47 a.m. on Friday, August 16, 2013 in Miller’s Merry Manor, Plymouth.
The daughter of Owen and Buena (Vista) Young, Dottus was born in Owensboro, Kentucky on August 11, 1930. She graduated from Monticello High School in 1948. She then attended Western Kentucky University, graduating in 1952 with a degree in Home Economics and a teaching certificate.
On August 19, 1952, Dottus married Buford Benge in Jackson County, Georgia.
Dottus had worked for American States Insurance in Indianapolis as an underwriter for 20 years before retiring in 1985.
She was a member of the Plymouth Baptist Church.
Dottus enjoyed cooking, baking, watching hummingbirds and Plymouth athletic events but dearly loved time spent with family especially her grandchildren.
Surviving is her husband, Buford of Plymouth, and son, Roy (Claire) Benge of Plymouth; three grandchildren: Carin (Josh) Rojas of Chicago, Kyle Benge of Plymouth, and Chelsea Benge of Plymouth; and a great-grandson, Jack Rojas. A brother Kenneth Young of Indianapolis also survives.
She was preceded in death by her parents, a sister; Lorena Horton and a brother; Theodore Young.
Visitation will be held on Monday, August 19th from 6 – 8 p.m. in the Johnson-Danielson Funeral Home, 1100 N. Michigan St., Plymouth. A family internment service will be held in Indianapolis, with burial in the Washington Park East Cemetery.
Memorial gifts may be made to the Plymouth Baptist Church, 11345 9A Road, Plymouth, IN 46563.