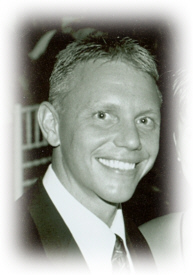 Douglas John Ruff, 40, of Carmel, Indiana, passed away there on Thursday, January 28, 2010.
He was born June 18, 1969, in Plymouth, the son of David A. and Alice M. (Newberg) Ruff, who survive.
He was married to Teresa Ijams of Clinton, Illinois, in 2000. They have one daughter, Sydney Christine.
Doug graduated from Plymouth High School with the Class of 1987 and played drums in the band. He graduated from Ball State University, Muncie, in 1992, with a Bachelor of Science Degree in Exercise Science. He was a member of Delta Chi Fraternity.
Doug first began working in the fitness industry in 1985 while still in high school, and continued his devotion to fitness sciences throughout his life. He served his internship in Phase II and Phase III cardiac rehabilitation at Kennestone Hospital, Atlanta, Georgia. He also assisted with the development of a corporate fitness facility for Lockheed International.
In 1993, Doug returned to Indianapolis to work in the orthopaedic industry fabricating and fitting various orthopedic devices. He began working independently as a personal trainer in the Indianapolis area and founded the Fitness Clinic of Indianapolis in 1996. The Fitness Clinic is one of the largest private training facilities in Indianapolis. In addition, the Fitness Clinic expanded its services to include facility management and employee programming for several Indianapolis based corporations including St. Vincent Indianapolis Hospital, Brightpoint North America, Kite Realty Group and St. Vincent Carmel Hospital.
Doug had a passion for music and enjoyed playing his guitar. Other hobbies included riding his motorbike, snow skiing and, especially, fishing.
Doug is also survived by his sister, Dawn (Ruff) Hooker of Plymouth, brother, David A., Jr., of South Bend, grandmother, Dorothy Newberg Reaker, Plymouth, along with many other family members and friends who loved him, including aunts, uncles, cousins, nephews and nieces. He was preceeded in death by his grandparents, Milton O. Newberg and John F. and Mildred C. Ruff. Visitation will be held at the Flanner and Buchanan Funeral Center 325 E. Carmel Drive, Carmel, on Monday, February 1, from 1 to 3 p.m., with services at 3 p.m.
Visitation will continue at the Johnson-Danielson Funeral Home, 1100 N. Michigan Street, Plymouth, on Tuesday, February 2, from 5 to 7 p.m., followed by a Remembrance Service at 7:30 p.m.
Burial will be in the New Oakhill Cemetery, Plymouth.
Memorial gifts in honor of Doug will be welcomed for the Sydney Ruff Education Fund at First Source Bank, Plymouth.