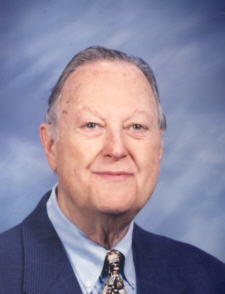 Dr. Harold B. Wackerle, D.O, 86, went to be with his Heavenly Father, on Sunday, January 13, 2008. He died peacefully of natural causes in Saint Joseph Regional Medical Center, South Bend, with Evelyn, his wife of 57 years at his bedside.
Dr. Wackerle was born on September 16, 1921 in Deerfield, Mo. to Harold E. and G. Marie Beahm Wackerle. He grew up in the Southeastern Kansas towns of Bartlett and Chetopa.
From 1942-1943, he studied premed at Coffeyville, (Kan.), Junior College and Pittsburg ( Kan.) State, before being drafted in June of 1943. He served his country as a decorated Staff Sergeant in the United States Army in World War II. As a member of the Medical Corps of the 41st Army Infantry Division, under Gen. Douglas MacArthur, he saw action in New Guinea and was in the battles of Leyte, Mindora and Luzon. He made three separate landings in the Philippines during the War. After receiving an undergraduate degree, on January 21, 1950, Dr. Wackerle graduated from the Kirksville School of Osteopathic Medicine with a degree in Osteopathic Medicine and Surgery. He mentioned often that he was the last surviving member of his graduating class.
In February of 1951, he completed his internship at Detroit’s Osteopathic Hospital in Highland Park, Michigan.
Three months before, on November 18, 1950 in Ontario, Canada, Harold and Evelyn McIlwain were married. She, a Registered Nurse, and her husband practiced medicine together, side-by-side for over 47 years. Their first office was in Lincoln then Cole Camp and St. Louis, Mo. He was elected County Coroner of Benton County, Mo., before coming to LaPaz, Ind. for his last forty years of the practice of medicine.
A devoted family physician, he made house calls at all hours of the night: in the snow and the rain and even delivered a baby under a street light in the back seat of his new 1952 Chrysler.
His office phone number was the same as his residence and only a wall separated his clinic from their home. This was patients always knew he was there for them.
At one time, he calculated that he had seen enough patients to fill Notre Dame Stadium four times.
Dr. Wackerle is survived by Evelyn, his devoted wife and by their two children and four grandchildren.
They are their son and daughter-in-law, Rex B. and Kim Wackerle and their children, Harold D. Wackerle and Lauren A. Wackerle, all of Arlington, Va., and their daughter and son-in-law and their children: Andrea M. and Earl M. Rozran and children, Eric Rozran and Marilyn M. Rozran, all of Pleasanton, California.
He was preceded in death by his parents, Harold E. Wackerle and G. Marie Wackerle of Chetopa, Kansas, and his son, Harold Stevan Wackerle, and sister, Virginia Marie Foley.
Friends are invited to visit with the Wackerle family on Friday, January 18, 2008, from 3 to 8 p.m. at the Johnson-Danielson Funeral Home, 1100 N. Michigan St., Plymouth, and on Saturday, January 19, 2008, for one hour prior to the 3 p.m. church services at the Lakeville United Methodist Church, 610 N. Michigan St., Lakeville, Ind.
The Reverend Larry Dimick and Reverend Doug Erickson will officiate at the funeral service for Dr. Wackerle.
Burial will be in the Oakhill Cemetery of Chetopa, Kansas.
The family requests that memorial gifts in his name be made to the Salvation Army.