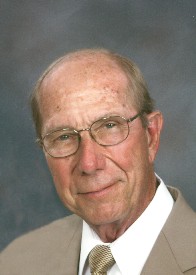 Dr. J. Kent Guild, 75, passed away Sunday morning, January 21, 2007, surrounded by family at home after battling leukemia.
Kent was born March 5,1931, in Indianapolis to Merrill Daniel Guild and Lily Kent Guild of Fairland, Indiana. He graduated from Fairland High School in 1949. He graduated from DePauw University magna cum laude in 1953 and graduated from Northwestern University School of Medicine in 1957. At DePauw he was a member of Gold Key honorary and served as president of the Interfraternity Council and president of his fraternity, Delta Kappa Epsilon. While at DePauw he also won the heart of Judith Barnes Drompp. He and Judy were married on June 25, 1955, in Logansport, Indiana.
While a medical student at Northwestern, Kent was elected National President of the Student American Medical Association in 1957. He served as a captain in the United States Air Force at Beale Air Force Base, California, from 1959 to 1961. He and Judy came to Plymouth in 1961. Kent thoroughly enjoyed his career as a family practice physician. His practice began in 1961 with Dr. Louring Vore and Dr. Ronald Peterson at their offices at 116 E. Washington St. He estimated he delivered about 2,000 babies and observed a disproportionate share of them came at night. He also made hundreds of house calls and personally dispensed medical care and compassion to thousands of patients. When he retired in 2000, he was delighted to turn his practice over to Dr. Joel Schumacher, Dr. Tod Stillson and Dr. Craig Miller. He was proud to help bring them to Plymouth and to entrust his patients to them.
Athletics were always an important part of Kent’s life. As a youth, he enjoyed his father’s passion for hunting and fishing. He also participated in basketball, softball, track & field, and baseball for Fairland High School. In basketball, he led the Hornets to a sectional victory defeating local powers such as Shelbyville and Columbus before losing in the regional finals to eventual state runner-up Madison. Kent followed family tradition and attended DePauw where he played varsity basketball three years for the Tigers. Highlights include scoring 21 points against Iowa and finishing his career with a 33 point output against rival Wabash. His DePauw career was recognized with his induction into DePauw’s Athletic Hall of Fame in 2001. Kent’s passion for sports continued in Plymouth where he became team physician for Plymouth High School and a co-founder of the Plymouth Athletic Booster Club. The Plymouth High School Athletic Department honored Kent’s 34 years of service by naming their new Athletic Training Center after him in 2006.
Physically fit throughout his life, Kent enjoyed many sports but mostly racquetball and golf as an adult. He played golf often with many of his friends as a member of Plymouth Country Club. Kent had few regrets but one of them was never having a hole-in-one.
Kent was an active member of the Plymouth First United Methodist Church and served in a number of roles from Sunday School teacher to Lay Member of the North Indiana Annual Conference.
As an active alumnus of DePauw, Kent served on the Alumni Board and the Board of Trustees. He served as the first chairman of the United Methodist Council of DePauw University. He served as physician on DePauw Winter Term medical mission trips to Conacaste, Guatemala and Puno, Peru.
Kent was active in his profession and in his community. Kent was a co-founder and the first president of the Marshall-Starke Development Center. He was past president of the Plymouth Hospital Medical Staff, Hospital Board of Trustees, the Marshall County Medical Association and the United Way. In 1966 he was recognized as one of five “Outstanding Young Men of Indiana” by the Jaycees. With Judy, he received the 2001 Community Spirit Award.
One of the things Kent enjoyed most was simply spending time with his family and grandchildren. This was especially true in the summertime which Kent and Judy spent at their cottage on Lake Maxinkuckee sailing, swimming and playing games such as dominos and cards with family members who would visit often.
Fundamentally, Kent had a positive attitude. He would frequently observe that he had a great life and was blessed. He often said he was “a lucky guy”. Even at the end, Kent chose to focus not on his disease but rather on his 75 very good years.
He is survived by wife Judith Drompp Guild and children John K. Guild, Jr. of Indianapolis and wife Dana; Anne Guild Adams of Indianapolis and husband Brian; Steven A. Guild of Athens, Georgia and wife Teri; and Sarah Guild Smith of Plymouth and husband Tim. Kent and Judy have 12 grandchildren: Emily Judith Adams (16), Laura Elizabeth Guild (14), Sarah Ruth Adams (12), J. Kent Guild III (12), Kevin Stuart Adams (11), Ellen Guild Smith (10), Curtis Guild Smith (8), Leah Guild Smith (6), Hugh Guild Smith (4), Kaitlyn Faith Guild (3), Allison Grace Guild (3), and David Allan Guild (1). He is preceded in death by his parents. He is survived by two sisters: Mary Guild Lothamer of Canton, Ohio, and Susan Guild Trauba of Loomis, California. He is also survived by many nieces, nephews and extended family.
Friends may call on Friday, January 26th from 3 – 8 pm in the Johnson-Danielson Funeral Home, 1100 N. Michigan St., Plymouth. A memorial service celebrating his life will be held at 11 a.m. Sat. in the First United Methodist Church, 400 N. Michigan St., Plymouth, the Rev. Dr. Dean Fager, Pastor will officiate.
In lieu of flowers, memorial gifts may be made to St. Joseph Regional Medical Center, Plymouth Campus, 1915 Lake Avenue, Plymouth, IN 46563, First United Methodist Church or the Dr. Kent Guild Memorial Scholarship Fund, established by dear friends Will & June Erwin c/o the Marshall Co. Community Foundation, 2701 N. Michigan St., Plymouth, IN 46563 Envelopes will be available at the funeral home or church.