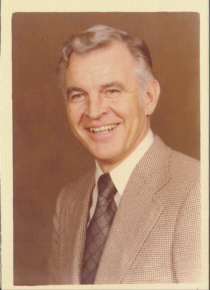 Dr. James S. Robertson, the much beloved Plymouth physician known to all his patients and friends as ‘Doc’ passed away peacefully after a brief illness Tuesday, February 6, 2007. He was 83 years old. Dr. Robertson was born in Plymouth on January 20, 1924, the only child of Stewart and Susie Jenkins Robertson. Ever since he was a young boy Jim knew he wanted to be a doctor and that commitment never wavered. After graduating from DePauw University in Greencastle, Indiana he went on to Indiana University School of Medicine graduating in 1946. That same year Jim married his beloved high school sweetheart Joanne Kubley. After completing his internship in 1948, Jim joined his brother-in-law, Jim Kubley, in the practice of medicine. After the Korean War broke out in June of 1950, Lt. s.g. James Robertson, USNR, was called into the Navy and deployed with his family to Pearl Harbor for two years. Upon Jim’s return to Plymouth, he reunited with his brother- in- law and their medical practice flourished for 47 years. In the 1970’s Jim participated in the Indiana University School of Medicine externship program. One of the young doctors he mentored was Dr. Byron Holm. A few years later Doc was proud to welcome Dr. Holm into their practice. Dr.James Kubley’s three sons, Dan, Jon and Rod, joined as well over the ensuing years.
The hallmark of Doc’s character can best be summed up by his response when a patient of limited means would ask how much he owed. ‘Next time you see me you can buy me a cup of coffee’. Over the years there were many Christmas cookies and fresh produce brought to his home as a quiet form of payment. And of course, many cups of coffee. Doc estimated he delivered well over 3,000 babies and was recognized throughout Northern Indiana as a gifted diagnostician. He was Marshall County’s Health Officer for more than 30 years and served as medical administrator to Pilgrim Manor, Mayflower and Shady Rest nursing homes. Doc received many awards, served on various civic committees and a member of numerous affiliations. He was most proud of his role in the formation of the Marshal County Planned Parenthood in the 1970’s. During the 1960’s as the local country health officer he was a major advocate for migrant worker health standards. Doc loved to play golf (was one of the principle developers of the Plymouth Country Club), bridge and most of all traveling to far off places. He often said if they just built the airport that was where he wanted to go! Doc Robertson’s generosity, loyalty, compassion and courage will be greatly missed by his family, friends, colleagues, his loyal staff and of course his patients. A devoted physician, he touched thousands of lives.
Dr. Robertson is survived by his loving daughter Lynn Ann Gubernick and sons Jon Steven and Camden James Robertson. Other survivors include his son-in-law Joseph Gubernick, daughter-in-law Violet Robertson, grandchildren William Steven and Scott Wesley Robertson and Catherine Joanne Gubernick. He was preceded in death by his loving wife, Joanne in 1992 and adored son, William Stewart Robertson in 1968. A special thank you to Mirtha Guerrero and the devoted staff of the Dujarie House in South Bend, Indiana.
The family will welcome friends and former patients to celebrate the life of their father and grandfather on Saturday, February 10th from 3 to 7 p.m. at the Johnson-Danielson Funeral Home, 1100 N. Michigan St., Plymouth, Indiana. Funeral services will be held Sunday, February 11th, 1 p.m. Burial will take place in Oakhill Cemetery, Plymouth, Indiana.
In lieu of flowers memorial gifts may be made to Planned Parenthood 1733 South Michigan Street South Bend, Indiana or the American Heart Association 208 South LaSalle Street Suite 900 Chicago, Illinois 60604.