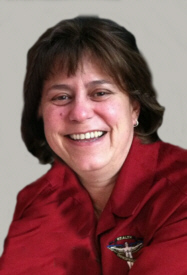 Dr. Janelle A. Bottorff, a talented practitioner of Chiropractic Care, was called Home Friday evening while traveling through Escambia County Alabama in route to Bay Minette to serve as a judge in a dog show event.
Janelle’s approach to life was grounded on strong Christian ideals, the strength of family bonds, a passion for her profession while serving those who were sick and suffering along with a zest for nature and God’s many creatures. At the age of 50 she will be missed by many.
She was first a daughter who was the seventh of eight children born to Dr. John M. and Carol L. (Emenaker) Bottorff Sr., in Plymouth on October 18, 1964. She was Baptized Roman Catholic in St. Michael Church, Plymouth where she remained a life member practicing her Faith. Janelle’s concern for her patients ran far beyond the scope of professional care. She lived her life by and often shared her own Father’s credo…If you do what you can in the eyes of God to the best of your ability, you can’t go wrong. She completed her elementary education at St. Michael School. As a member of the 1983 graduating class of PHS, her activities included the Speech Team, FFA and had served as the Pilgrim Mascot for the 1982 State Championship. Janelle then received her associate’s degree at Ancilla College and completed her Doctor of Chiropractic at Palmer College of Chiropractic in 1992.
Her personal interests included being a member and President of the Plymouth Conservation Gun Club, a Qualified Canine Judge for JGV-USA, and member of VDD-GNA (Director of Testing – Great Lakes Chapter) and operated her own kennel raising deutsch drahthaar dogs. She loved the outdoors hunting, fishing and caring for homing pigeons, chickens and honey bees.
On July 31, 1993 in St. Michael Church she wed Ronald K. Hoffer in the sacrament of Holy Matrimony and have enjoyed 22 years together. Ron survives along with her beloved father and fellow practitioner Dr. John M. Bottorff Sr. Sisters Eyvonne A. (Gary) Aker and Beth A. (Craig) Gudeman all of Plymouth. Brothers Joseph P. (Liz) Bottorff of Plymouth, Dr. John M. (Lori) Bottorff Jr. of Crawfordsville, and Patrick J. Bottorff of Plymouth. Numerous nieces, nephews, cousins and friends also survive.
She was preceded in death by her dear mother Carol, a sister Barbara A. and a brother Matthew J.
Family and friends will gather to remember the life of Dr. Janelle Bottorff on Friday, March 13th from 3 – 8 p.m. in the Johnson-Danielson Funeral Home, 1100 N. Michigan St., Plymouth. A rosary will be prayed at 8:00 p.m. in the funeral home.
A Mass of Christian Burial will take place on Saturday, March 14th at 11 a.m. in St. Michael Catholic Church 613 N. Center St., Plymouth. Celebrants of the Mass are Fr. Jeffery Largent and Fr. John Korcsmar C.S.C.
Burial will follow in the New Oakhill Cemetery, Plymouth.
Preferred gifts of remembrance are Masses said in her memory or memorial gifts to St. Michael Catholic School 612 N. Walnut St., Plymouth, IN 46563.
The office of BOTTORFF CHIROPRACTIC CLINIC will remain closed during this next week of services.