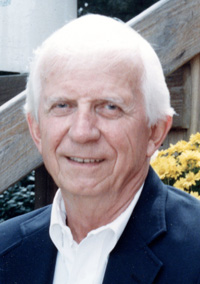 At 8:56 Saturday evening, while in the lasting company of family and friends, Dr. John Milton Bottorff Sr., DC was called to his Heavenly home and into the presence of the Holy Family. Affectionately known as â€˜Docâ€™, he died peacefully at the age of 94. He loved his family and always believed that life should joyfully carry on in service to a loving God and in the aid of others.
On June 29, 1923 in Plymouth, he was born the second child of five to Milton and Angla (McLochlin) Bottorff. He was raised in his faith as a member of St. Michael Roman Catholic Church where he received his elementary education at St. Michael Academy. He then became a student of West High School. He took time off to help support his family through the Great Depression. He later received his GED that allowed him entrance into college.
John proudly gave service to his Country during WWII as a Sergeant with the Fifth Army Air Corps in the South Pacific. During this time he would injure his back on several occasions giving lead to his chosen career. He remained a member of the V.F.W. Post 1162 and American Legion Post 27 of Plymouth.
It was on September 13, 1952 in St. Michael Church, he and the love of his life, the former Carol L. Emenaker entered into the Vows of Holy Matrimony and became ever dedicated to each other, family and an ever deepening faith. Even with his GI Bill expired he and Carol were committed to pursuing careers together in the Practice of Chiropractic. They moved to Davenport, Iowa in order to enroll in the prestigious Palmer Chiropractic College. Only John would fulfill that dream in 1958 through Carolâ€™s support as a mother and homemaker to their first three children. To attain additional technical skills, he graduated from Lincoln Chiropractic College in 1958.
The family returned to Plymouth in 1958 and established the Bottorff Chiropractic Office on LaPorte Street and in 1962 he moved to the Clinic on Jefferson Street that he continually developed over a career span of over 60 years. His patients loved the personal attention given their own lives and wellness. It was also fulfilling as a father to be accompanied by his son Dr. John M. Bottorff Jr. and then practice alongside his daughter the late Dr. Janelle A Bottorff. The practice would close following her passing in 2015.
Professionally Doc received many awards and was most proud of being awarded in 2010 a Fellowship of Palmer Academy of Chiropractic. At that time Dr. Janelle affirmed; â€œHis passion for the healing powers of chiropractic to help others only grows stronger.â€ He has had membership in the Palmer Presidents Club, American Chiropractic Association, Indiana State and International Chiropractic Associations.
As a lifetime member of St. Michael with a devotion to the Sacred Heart of Jesus, John has served as a Eucharistic Minister, Trustee and Finance Committee member. He served as Honorary Chairman of the Mission 2000 school expansion project and is also a member of the Knights of Columbus Council 1975. John was a longtime supporter of Ancilla Domini and the Community of the Poor Handmaids of Jesus Christ.
Civic leadership came with the formation of the original M.C. Sherriffâ€™s Merit Board along with Budd Treat, Pickle Smith and Don Travis, the Boards of the Plymouth Country Club, Ducks and Quails Unlimited organizations, as well as the Plymouth Industrial Development Corporation (PIDCO).
Doc will be remembered as a gentleman who loved to be the brunt of humor and give it right back. He was a true outdoorsman who loved to hunt game and so enjoyed family fishing trips to Minnesota and boundary waters of Canada.
John and Carol were blessed to have their family grow to eight children. They and their families are: Joseph P. (Elizabeth) Bottorff of Plymouth and children, Bellinda, Lillian and Francis; Eyvonne A. (Gary Sr.) Aker of Plymouth and children, Gary Jr. and Lynndi; Dr. John M. (Lori) Bottorff Jr. of Crawfordsville and children, John, Bryant, and Angela; Beth A. (Craig) Gudeman of Plymouth and children, Jennifer and Adam; Patrick J. Bottorff of Plymouth and children, Ginger, Amy and Kaitlyn; a son-in-law; Ronald K. Hoffer of Walkerton also survives. Children who have preceded in death include, Barbara A. Bottorff, Matthew J. Bottorff and Dr. Janelle A. Bottorff.
Seven adored great grandchildren survive as well, Madelyn, Benjamin, Lainey, Wyatt, Bronson, Harley and Ava.
John was preceded in death by his siblings, Joseph Bottorff, Robert Bottorff, Thomas Bottorff and Mary Thomas. They leave behind many dear nieces and nephews to Doc.
Family and friends will gather at the Johnson-Danielson Funeral Home to celebrate the life of Dr. John on Wednesday, July 12th from 4 â€“ 7:30 p.m. with a Rosary recited at 7:30 p.m. A Mass of Christian Burial will be held in St. Michael Catholic Church, 613 N. Center St. Plymouth on Thursday, July 13th at 11 a.m. with visitation beginning at 10 a.m.
He will be laid to rest next to his family in the New Oak Hill Cemetery, Plymouth. Military honors will be accorded by the United States Army Honor Guard, American Legion Post 27, Veterans of Foreign Wars – Marshall County Post 1162 and the D.A.V. with Jeff Chamberlin providing Taps.
A luncheon will follow at the Pretty Lake Golf Club, formerly the Plymouth Country Club.
Preferred are memorial gifts to: Masses or St. Michael Grade School, 612 N. Walnut St., Plymouth, IN 46563, or Ancilla College, P.O. Box 1, Donaldson, IN 46513.
Please remember Dr. John with his mantraâ€¦â€Do it in the eyes of God, to the best of your ability.â€