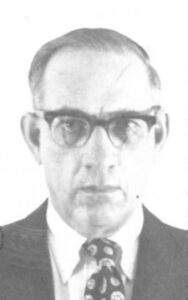 John Jacob Swihart M.D.FCAP, 89, died Wednesday February 20, 2008, in Miller’s Merry Manor, Culver at 5:00 a.m.
He was born on the family farm near Argos to Vernon and Katherine Garver Swihart. His father was in France during World War 1 when John was born. He was educated in Pittsburg and received his M.D. degree from the University of Pittsburg in 1944. He then served in the Army Medical Corps, on Okinawa and occupied Japan.
October 19, 1955 in Detroit, Michigan John married Beverly J. Holmberg. Together they had a daughter Sharon.
For John’s residency in Pathology he selected three distinguished pathologists and trained a year with each of them. They were AS Giordano, founder of the South Bend Medical Foundation, Frank Hartman at the Henry Ford Hospital in Detroit, MI., and William Boyd at the Banting Institute, University of Toronto, Canada. He then went into the private laboratory business.
In 1966, the family moved to Winnetka, Illinois so that their daughter, Sharon, age 7, could be enrolled in Crow Island grade school in the New Trier School District. He expanded her education to include farming, riding and the care of animals, photography, classical music, violin, astronomy, French, skiing, sailing, and fine art. These were his hobbies as well as traveling, reading, and attending live theater performances, and ballet.
He retired to the family farm near Argos and raised Limousine cattle under the name Grazing Gold Farms. He also kept up with the advances in medicine and science in general until about the last year of his life.
John is survived by his wife Beverly of Argos, IN, and daughter Sharon Swihart of Amherst, Mass.
He was preceded in death by his parents.
Following John’s wishes their will be no visitation or funeral services.