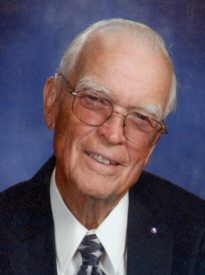 Dr. Kenneth â€œKenâ€ E. Mart D.C., 88, of Plymouth, passed away peacefully Wednesday, June 22, 2016 in his residence.
Ken was born July 10, 1927 in Matthews, Indiana, to the late Palmer and Pauline (Overmeyer) Mart. He graduated from Plymouth High School in 1945, where he was the senior class president and PHS drum major.
Ken married Elizabeth â€œBettyâ€ (White) Chenoweth Gottschalk on August 15, 1980; and she survives. He served in the United States Navy during WWII and was honorably discharged in 1946. Ken graduated from Indiana University with a business degree; he then graduated from Palmer College of Chiropractic in Davenport, Iowa. He worked with Dr. Bottorff in Plymouth, for sixteen years, and then in 1990, he owned and operated Mart Chiropractic Center in Knox, retiring in 2000.
Ken was active in the Gideonâ€™s International, Bourbon Lions Club, and was a member of the Plymouth Wesleyan Church. He wintered in Avon Park in Florida. He enjoyed attending his grandkids activities, and watching sporting events. Last May, all WWII veterans were invited to attend; of which he did, the Honor Flight in Washington D.C.
Surviving is his wife; Betty Mart of Plymouth, four children; Beverly (Hubert) Porzner of Montana, Julie (Shawn Johnson) Mart of Minnesota, Brian Mart of Indiana, and Jeff Mart of California, six grandchildren; Sara Mart, Myra Cook both of Montana, Allison Porzner of California, Julia Porzner, Leah Porzner both of Montana, Malachi (Lyndsey) Mart of Nebraska, four great-grandchildren; Tey Antonsen, Marley Antonsen, Amber Cook, Jade Cook, all of Montana, five step-children; Lynn (Ron) Dodson of Plymouth, Gary (Mary) Chenoweth of Elk Rapids, Michigan, Sandy (Gary) Stanley of Elkhart, Lu (Chuck) McCain of Southhaven, Mississippi, Dave Gottschalk of Elk Rapids, Michigan, six step-grandchildren; Kim (Morry) Riddle of Plymouth, Kristy (Michael) Hulme of Jacksonville, Florida, Rob (Natalie) Chenoweth of Ft. Wayne, Amy Chenoweth of Nashville, Tennessee, Michelle (Cole) Ridenour of Osceola, Jennifer (Derek) Drews of Granger, eight step great-grandchildren; Cameron and Cassidy Riddle, Connor and Blake Ridenour, Brooklyn and Juliana Chenoweth, Avery Drews and Piper Hulme. Also surviving are his three brothers; Palmer Mart of Bloomington, Robert Mart of Indianapolis, and Jack (Marilyn) Mart of Indianapolis. He was preceded in death by his parents.
Visitation will be held on Monday, June 27th from 4 â€“ 7 p.m. in the Johnson-Danielson Funeral Home, 1100 North Michigan Street, Plymouth. Services will be held at the Plymouth Wesleyan Church, 11203 South Michigan Street, Plymouth, on Tuesday, June 28th at 10 a.m. with Rev. Jim Vermilya and Pastor Ed Friberg officiating. Visitation will continue in the church after 9 a.m. until time of services.
Burial will follow at the Sandridge Cemetery in Bourbon, with Military Honors provided by members of the American Legion Post 27, Veterans of Foreign Wars- Marshall County Post 1162 and D.A.V.
Preferred are memorial gifts to the Gideonâ€™s International, P.O. Box 494, Plymouth, Indiana 46563 or to the Plymouth Wesleyan Church, 11203 South Michigan Street, Plymouth, Indiana 46563.