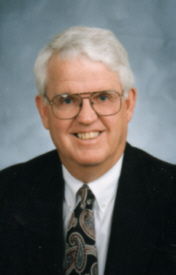 Dr. Kenneth L. Payne, 77, of Ft. Wayne, IN, passed away peacefully at four A.M. on March 16, 2016, at the Catherine Kasper Life Center at Donaldson, IN, following an extended illness. While there he was under the Center for Hospice Care.
Ken was born in Fowlerton, IN, to Luther K. Payne and Ruth (Van Natter) Payne, the third of four children. Being raised on a farm, Ken was the first in his family to graduate from college attending Ball State University and graduating in 1960. He was a member of the Sigma Phi Epsilon Fraternity where he made friendships which lasted his lifetime. Ken subsequently earned a Master’s Degree in 1965 and his Doctorate of Education in 1987. Ken continued to serve Ball State as an active alumnus and was a past president of the Teachers College Alumni Association. Professionally, Ken began his career as an educator, coach and principal, first at Jackson Center then Bluffton Junior High, both in Wells County. He spent twenty-nine years as a school superintendent. He retired after serving as superintendent of Duneland School Corporation for twelve years. While at Duneland, he was named Indiana Superintendent of the year in 1999. Prior to Duneland Schools, he served as Superintendent of Plymouth Community Schools (13 years) and Adams Central Schools (4 years). Upon his retirement after 40 years in education, Ken worked part-time for Fanning and Howey Architects, stopping to meet with old and new friends and continuing his dedication to education. Ken was inducted into the Sigma Phi Epsilon Hall of Fame in the year 2000.
During his life, Ken also played an active leadership role in numerous service activities including the United Way, Kiwanis International, and Chamber of Commerce. Professionally, Ken was active in the American Association and Indiana Association of School Superintendents, Phi Delta Kappa, Indiana School Board Association and the National Academy of School Excellence.
Ken and his wife of over fifty-six years, Brenda S. (Coe), retired to Valrico, FL, before returning to Indiana full time in 2014 to be closer to family. In addition to his wife and two sons, Gregory A. (Sue) Payne and Geoffrey R. (Jennifer) Payne, Ken is survived by seven grandchildren, Kelly (Tom) Rybicki, Brittany, Davis, Lily, Samantha, Laura and Jacob Payne and a great grandson Payne Tuitt. Ken was preceded in death by his sister Juanita Caldwell and parents. Ken is survived by his sister June (Junior) Quillen of Dunkirk, IN, brother Richard (Nancy) Payne of Wentzville, MO, mother-in-law Treva Coe, brother-in-law Russell L. (Gay) Coe of Muncie, IN, sister-in-law Sonia (John Blue) Coe of Ft. Wayne, IN, as well as numerous nieces and nephews and their families.
While Ken accomplished many things professionally during his lifetime, his true focus was his family, friends and children. Ken loved his family dearly, enjoyed spending time with friends, and had a lifelong love of sports. Those of us who remain will always remember his endearing laugh and caring nature–these are the qualities that will be cherished forever.
The family will receive friends on Sunday, March 20th from 1 – 4 P.M. EDT in the Johnson-Danielson Funeral Home, 1100 N. Michigan St., Plymouth. A celebration of Ken’s life will be held on Monday, March 21st at 11:00 A.M. EDT in the First United Methodist Church, 400 N. Michigan St., Plymouth where visitation will resume after 10 A.M. Pastor Larry Marhanka and Rev. Lloyd Hall of Grace United Methodist in Hartford City, IN will officiate.
Immediately following a luncheon and time of continued sharing will occur at the Plymouth Golf Club located at 10055 Pretty Lake Trail.
Ken will be laid to rest in the New Oak Hill Cemetery, Plymouth.
In lieu of flowers the family suggests memorial contributions to your local United Way for the benefit of children would be a fitting tribute to Ken’s life.