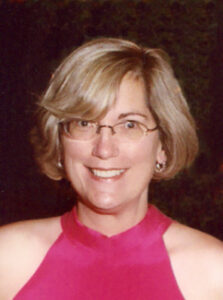 Dr. Susan Alice Bardwell, age 48, beloved mother, wife and pediatrician passed away Saturday morning, August 25, 2012. Susan was born August 2, 1964, in Hillsdale, Michigan, to Larry Allen Hoedema and Barbara Joan Hoedema. She is survived by both parents, her husband, Michael Keith Bardwell, and children Ian Edward Allen Bardwell and Hayden Michael Lawrence Bardwell. She is also survived by a sister, Lisa Ann Freigang, and many nieces, nephews and extended family.
Susan grew up Hillsdale, Michigan and graduated from Hillsdale High School with Honors in 1982. She graduated from Ferris State University with a BS of Science Marketing with High Distinction and an Associates Degree in Dental Hygiene. Susan attended Rush Medical College, in Chicago, IL, where she received a Doctor of Medicine degree in 1994. Susan was also awarded a Research Scholar position at Howard Hughes Medical Institute (N.I.H.) in Bethesda, MD, in 1993 and completed her Pediatric Residency at Johns Hopkins University in Baltimore, MD in 1997.
Susan received many honors and awards throughout her medical career and published several papers pursuant to her research in Allergy & Immunology at The National Institutes of Health. Some of the honors Susan was most proud of were the Howard Hughes Medical Institute Fellowship for Continued Medical Studies in 1993-1994, The Child and Family Advocate of the year in 2000, Lifelink International Adoption Agency Advisory Board in 2001, and the Golden Apple Excellence in Teaching in the Primary Care Experience in 2002.
Besides time spent in pediatric practice, Susan was an Assistant Professor of Clinical Pediatrics at the University of Illinois College of Medicine in Rockford, IL. Susan truly enjoyed teaching and mentoring new medical residents. Susan’s love of pediatric medicine eventually led her to Marshall County Pediatrics where she lovingly and tirelessly served her community as Pediatrician from June of 2003 to August of 2012. She was a true advocate for both her patients and their families. Susan was involved in many pediatric focused activities and causes in her local community including promotion of bike helmets and car seats for children’s safety. She was loved by staff, patients, and their families where she was affectionately known as Dr. B.
Susan’s greatest joy was that of being a devoted mother to her two sons Ian and Hayden Bardwell. She always enjoyed watching and cheering for all her sons’ athletic pursuits as well as supporting and attending their music concerts. She was active in promoting music and competitive swimming in the local Plymouth Area Schools. Susan was tenacious in her advocacy of music at the elementary school level and lived to see the re-establishment of the Plymouth’s classical music program in the elementary schools. Susan was also a violinist who had avid interests in travel, gardening, fine arts and vegetarian cooking. She would often be seen Saturday mornings at her local Plymouth Farmer’s Market. At age 40, the running bug bit her and she successfully completed her first of several Mini Marathons starting with the OneAmerica 500 Festival in May of 2005. She was a member of the United Methodist Church of Plymouth Indiana.
Family, patients and friends are invited to make a visit to Dr. Bardwell’s practice – Marshall County Pediatricians located in the Medical Office Building 3, Suite 110 located on the Plymouth Campus of St. Joseph Regional Medical Center, 1919 W. Lake Avenue in Plymouth on Wednesday, August 29th from 5:30 – 7:30 P.M. and share memories.
A memorial service will be held on Thursday evening at 7 P.M. in the First United Methodist Church, 400 N. Michigan St., Plymouth with Pastors Jeff Herron and Larry Marhanka officiating. In lieu of flowers, memorial gifts may be made to Plymouth Community Youth Orchestra c/o
Marshall County Community Foundation, 2701 N. Michigan St., Plymouth, IN 46563, Sharks Build-a-Pool/PAC fund also c/o Marshall County Community Foundation. You may also make a donation to Culver Military Academy Relay for Life (organized by her son Ian; www.relayforlife.org) – American Cancer Society, Northwest Indiana Office, 130 Red Coach Dr., Mishawaka, IN 46545.
Susan, gifted her body to the Indiana University Hospital – Anatomical Board, in an effort to advance wellness for others.