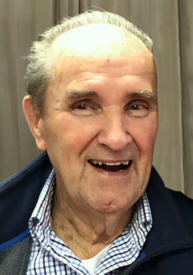 Duke J. Kuskye, 85, passed away on Monday, April 24, 2017 in Cicero, Indiana where he has been living for the past four years to be close to his kids; however, Duke called Plymouth his home.
He was born on December 17, 1931 in South Bend, Indiana to Lawrence and Mildred Arvilla (Richardson) Kuskye Sr. He attended West High School.
On March 22, 1951, Duke and Marlene were married in Louisiana while Duke was serving in the U.S. Army. Marlene truly was the love of his life. He deeply missed her after they were separated when a car accident took her to heaven in 1987.
He worked for the South Bend Tribune Newspaper before his retirement. He was a member of Trinity United Methodist Church in Plymouth and attended Cicero Christian Church.
Duke is survived by his children: Deb Bailey of Pendleton, Tim & Sharon Kuskye of Indianapolis, Lisa & Terry Davis of Cicero and Lori & Jeff Thomas of Carmel; 9 grandchildren: Shawna (Bailey) Ferguson, Carrie (Bailey) Romine, Kristin & Brad Kuskye, Alex & Josh Thomas, Jenny, Stephanie and Elizabeth Johnston; 7 great-grandchildren: Cole, Cheyenne and Chase Ferguson, Emma and Addy Romine, Emma Johnston and Ariana Kuskye.
Two brothers: Ralph (Pat) Kuskye, Larry (Marilyn) Kuskye; 2 sisters, Evy (Bill) Wenino and Scarlett Kuskye, and a sister-in-law, Patricia Kuskye, all of Plymouth. Numerous nieces and nephews also survive.
Duke was preceded in death by his wife, parents and brothers, Everett and Richard Kuskye, sister, Viola â€œDoddyâ€ Reese and a brother-in-law, Dean Tetzlaff.
Friends are welcome to celebrate Dukeâ€™s life from 12:30-2:30 p.m. on Wednesday April 26, 2017 at the Johnson-Danielson Funeral Home, 1100 North Michigan Street, Plymouth. Funeral services will immediately follow in the funeral home at 2:30 p.m. with Rev. Charles Krieg officiating.
Burial will follow at the Oak Hill Cemetery with Military Honors provided by members of the American Legion Post 27, Veterans of Foreign War- Marshall County Post 1162 and Disabled American Veteran Chapter 42.
Memorial contributions may be directed to Trinity United Methodist Church, 425 S. Michigan Street, Plymouth, IN 46563.