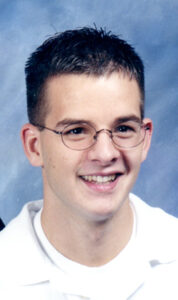 A memorial gathering of family and friends of Dustin Eric Hatfield will be held on Saturday, May 12th from Noon until 1 p.m. in the New Oak Hill Cemetery Chapel, 1300 Chester St., Plymouth. A service will begin at 1 p.m. under the direction of Rev. Rochelle Hammond a family friend. Later in the day just prior to the PHS Varsity Boys Baseball game scheduled for 6:30 p.m. at Nixon Field there will be a tribute for Dustin a former player and dedication of a scholarship in his name.
Dustin, 38, of Salem Indiana and formerly of Plymouth, passed away unexpectedly on Thursday, Sept. 21, 2017. He graduated from Plymouth High School with the Class of 1999.
On January 9, 2010 he married Patricia Hatfield, who survives. He is also survived by his father figure Mike Mercer of Plymouth with whom he had made his home from the age of 15. A brother Chad (Vicky) Hatfield, sister Melissa Hatfield, sons Michael, Shawn and Ryan Durham, two nieces Bailey and Olivia Hatfield, three nephews, Brady and Sam Hatfield, and Kane Shock, five grandchildren, Courtney, Riley, Peyton, Brayln, and Myla Durham, two great grandchildren, Levi and Cami Durham. He was preceded in death by his mother, Becky O’Hara and a brother Bryan Hatfield.
Dustin loved hunting, baseball and spending time with his family. He had a passion for joking and picking on people. He also enjoyed his time spent in the US Army and very proud of being a veteran.
In lieu of flowers memorial contributions may be made to: HERE/HEAR for Suicide Awareness & Prevention, c/o 704 S. Michigan Street, Plymouth, IN 46563.