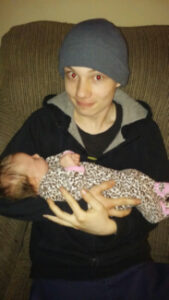 Dylan James Kruyer, 20, a resident of 757 N. Oak Drive, Plymouth, passed away suddenly in his mother’s home on Sunday May 15, 2016. He was born in Plymouth on July 20, 1995 the son of James Robert Kruyer and Stephanie F. (Skipper) Kruyer. They both survive. Dylan was always a Momma’s boy.
Dylan attended Plymouth schools and formerly worked at Subway in Plymouth.
He was mechanical, enjoyed cruising, kidding around and always having a fun time with family and friends, especially Seth and Kaylee, Anthony, Charlie and Alyssa. Though they drifted apart, Dylan always had a spot for PeeWee in his heart. They were special friends before his passing.
Lately his greatest joy was in the presence of his five month old niece Roselynn. Dylan’s love for Roselynn further strengthened the strong bond between him and his sister.
Dylan is survived by his father Jim of Plymouth with whom he made his home, his mother Stephanie F. Kruyer-Hughes of Plymouth and siblings; Nicole “Nikki” Lynn Kruyer of Plymouth, Dakota “Cody” Logan Kruyer of Plymouth and Troy Allen Kruyer formerly of Plymouth. His paternal grandfather John Kruyer of Argos, paternal grandmother Margaret L. Kruyer of Plymouth and maternal grandfather Ken Skipper of Kendallville also survive. Family and friends will come together at the Johnson-Danielson Funeral Home 1100 N. Michigan St. Plymouth on Monday May 23rd from 5 – 6 p.m. to honor Dylan’s young life. A service of remembrance will begin at 6 p.m. in the funeral home.
Memorial gifts may be made to the Family.