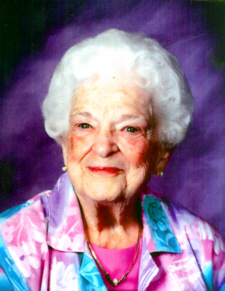 E. Jane Peregrine, 92, a resident of River Park, passed away Thursday morning in the Miller’s Merry Manor, Plymouth. She was a lifetime Plymouth resident.
Jane was born the daughter of Alfred C. and Gertrude E. (Twomey) Scheetz in Plymouth on June 7th 1916. She and her two brothers attended Lincoln High School, she being a member of the Class of 1934.
On July 8th 1936 she became the bride of Garold E. Peregine in Mitchell, South Dakota. Together for over 58 years, they raised three children and enjoyed several winters in the New Port Richey area of Florida. He preceded her in death on June 27th 1994.
Jane was a dedicated homemaker who on occasion helped out at Felke Florist on special holidays and worked on the Voter’s Registration Board and in the Treasurer’s office. She was also a former member of the Women of the Moose.
Her church, the Trinity United Methodist was very special to her and she remained a member of the Mary & Martha Circle. She enjoyed crocheting, playing Euchre and collecting Elephants.
Her children are; Barbara L. “Babs” and Jim Johnson, Vickie D. and Russell Creed, all of Plymouth and Phillip E. and Sue Peregrine of Fort Worth, Texas.
She has nine grandchildren and nine great grandchildren: Buster and Rhonda Johnson and children Jessica Lynn and Christopher James of Plymouth; Bruce and Suzy Johnson and children Nathan James and Paul Allan of Plymouth; Jacquelynn “Jacque” and Duane Culp and children Katelynn Jane and Brittany Lynn of Plymouth; Brent Johnson of Plymouth; Todd Creed of Indianapolis; Barbara and Brett Thomas of Carmel and Wendy Creed of Indianapolis. Suzie and Dr. Lance Hampton and son Davis Phillip of Midlothian, Vir. And Michelle and Jason Musick and children James and Katherine Taylor of Austin, TX.
Also surviving are her sisters-in-law; Dorothy Scheetz, Annabelle Peregrine and Geneva Thomas along with numerous nieces and nephews.
She was preceded in death by her parents, spouse, stepmother; Edna Scheetz and two brothers; Thomas and James Scheetz.
The family will receive friends on Saturday, May 9th from 1 – 3 p.m. in the Johnson-Danielson Funeral Home, 1100 N. Michigan Street, Plymouth where services will be conducted by grandson, Bruce Johnson at 3 p.m. Burial will follow in the New Oakhill Cemetery.
Memorial gifts may be made to the Trinity United Methodist Church, 425 S. Michigan St., Plymouth or the Marshall Co. Council on Aging, 1305 W. Harrison St. Plymouth.