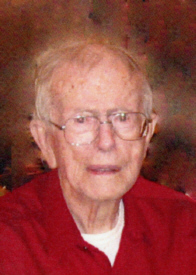 Earl “Wayne” Cox, 93 a Marshall County resident and farmer for most of his life, passed away at 3:15 p.m. Monday, February 22, 2016 in the St. Joseph Regional Medical Center, Mishawaka.
Wayne was born in Plymouth, Indiana on June 12, 1922 to Edgar J. and Lura G. (Snyder) Cox. He graduated from LaPaz High School with the class of 1940.
In the First Presbyterian Church in Plymouth, Wayne took as his bride Marjorie L. Stephey on November 2, 1941. She would precede him in death on January 6, 2013.
Wayne proudly served our country in the U.S. Navy during WWII, and was Honorably Discharged in 1946.
After his discharge, he worked for South Bend Tool & Die for over 30 years before his retirement in 1982.
Wayne was a member of the First Presbyterian Church in Plymouth and the LaPaz Lions Club. He had a Lions pin collection that he did some trading with, as well as, a golf ball collection. Wayne also had a love for sports and attended many events in the area.
He is survived by his children: Larry W. (Betty) Cox of Reno, NV, Sherry J. Kibbe of Lafayette, IN, and Bruce L. Cox of Boyceville, WI; 9 grandchildren and 9 great-grandchildren; a brother, Dale E. (Betty) Cox of Lakeville, IN and several nieces and nephews.
Wayne was preceded in death by his wife and brothers; Paul and Lowell.
A Celebration of Life will be held on Saturday, February 27th from 10 a.m. until noon in the Johnson-Danielson Funeral Home, 1100 N. Michigan St., Plymouth, where services will begin at noon with nephew Rev. Steven Cox officiating.
A luncheon and continued time of sharing will immediately follow services in the Cornerstone Community Fellowship and Ministry Center 216 E. Washington St. in LaPaz.
Burial will follow in the Bremen Cemetery.
Memorial contributions can be made to the LaPaz Lions Club or Cornerstone Church.