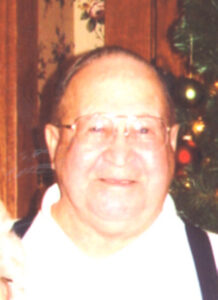 Earl Owen “Hap” Nifong, 85, died at 1:20 a.m. on Friday, March 6, 2009, in Miller’s Merry Manor, Plymouth.
The “Hap” stood for ‘happy’, and Earl, a lifetime Marshall County resident, a dedicated farmer and family man led a happy and full life.
Born on February 19, 1924, in Green Township, Earl was the son of Noble Leroy and Cora Alma Stone Nifong. He graduated from Argos High School.
On December 10, 1944, Earl and Fern Opal Neidlinger were married in the Church of the Brethren in Plymouth.
They started farming on shares at the old Lemert Sale Barn farm north of Plymouth, and learned how to trap for muskrats at the ditch that ran through their farmland.
In 1955, they bought a farm east of Argos. Earl worked in several places: Bendix; Moriarity Buildings; Lone Star Boat Co. of Bremen delivering Boats; Dunlap’s of Plymouth delivering orange juice; Smith-Douglass Fertilizer Warehouse at Argos as manager and was a school bus driver for Argos Community Schools from 1965 to 1977.
Earl was a member of the Church of the Brethren and an honorary member of the FFA.
Earl is survived by Fern, his beloved wife, Argos, and by their two daughters and two sons. They are Reta Kaye and Charles Middaugh, Argos; Rose Marie and Tom Feeney, Indianapolis; Devon Earl and Deb Nifong, Argos and Kenny Leroy and Linda Nifong, also of Argos.
Nine grandchildren and their families also survive: Andy (Mandy) Nifong and their children Bailey J. and Owen; Sarah (Earl) Betz and their children Tyler, Payton and Braxton; Emily (Mike) Fishburn and their children Douglas, Coleman, Beau and Stephen; Ryan Nifong and his son Caden; Katie Nifong, all of Argos, Phil (Barb) Middaugh and their children Bailey A. and Rachel; Cheryl Middaugh; John Feeney; and Mary Feeney, all of Indianapolis, along with a brother, Burl Nifong, Indianapolis and two sisters, Gladys Snyder and Betty Nolin, both of Argos.
His parents, Noble Leroy and Cora Alma (Stone) Nifong preceded Earl in death. An infant son, Allen Leon, two brothers, Paul and Fred, and three sisters, Dorothy Nifong, Wilma Stults and Jennie June Voreis have also died.
Friends are invited to share their memories of Earl and visit with his family from 4 to 8 p.m. on Tuesday, March 10, 2009, and after 7 a.m. on Wednesday, at the Johnson-Danielson Funeral Home, 1100 N. Michigan St., Plymouth and for one hour prior to the services at the Plymouth Church of the Brethren on Wednesday.
Funeral services, officiated by the Rev. Ruth Yoder, pastor of the Plymouth Church of the Brethren, will be held in the church, 1130 N. Michigan St., Plymouth, at 11:00 a.m. on Wednesday, March 11, 2009.
Memorial gifts in Hap’s memory may be made to the Plymouth Church of the Brethren.