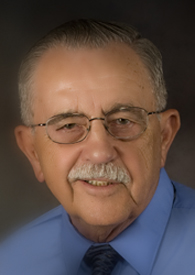 Earl R. Crim, 79, of 805 Baker Street, formerly of Lowell Indiana, passed away in his home surrounded by his family at 6:14 a.m. on Tuesday, June 4, 2013.
Earl was born on March 21, 1934 in Johnson City, Illinois to Earl W. Crim and Lora Lee (Kopp) O’Neal. He graduated from Johnson City High School in 1952. Earl served in the United States Marines during the Korean War.
In Gary, Indiana, Earl took Jacqueline K. Peregrine as his wife on February 21, 1959.
He worked for Inland Steel in East Chicago, Indiana and for the town of Lowell, Indiana. Earl was an elected member of the Lowell town board. He served on the Plan Commission and the Board of Zone Appeals. He served on the Lowell Volunteer Police Department and the Lake County Sheriffs Department. Earl’s favorite sport was football. He had a dream of a junior football league for the Lowell youth. In 1976 he recognized his dream and brought Pop Warner Youth Football to the Lowell community.
Earl was a passionate discipleship class teacher for young teens, after his retirement. He touched many lives. In his free time, he was amazing at woodworking, making crosses being his specialty.
He is survived by his loving wife, Jackie of Plymouth and his two children: Diane (Ron) Zimmerman of Plymouth and Greg (Andrea) Crim of Ferndale, WA; 6 grandchildren: Taylor Crim, Jordan Crim, Colson Crim and Hunter Crim, Ridge Zimmerman and Tristan Zimmerman Comer; and 2 great-grandchildren.
Earl was preceded in death by his parents, step-father, Virgil N. O’Neal, his infant daughter, Dawn Crim, and his sister, Jean Hill.
A Celebration of Life will be held in Earl’s honor on Saturday, June 15, 2013 at 11:00 a.m. at The Cross Church, 100 W. 3rd Street, Rochester, IN 46975.
Burial will be in the Maple Grove Cemetery at a later date.
Memorial contributions can be made to The Cross Church in Rochester or the Center for Hospice Care 112 S. Center St. Plymouth IN 46563.