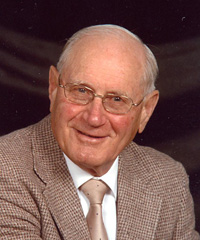 Earl Strang, 91, known as Bud to friends and family died of natural causes at 6:00 AM Sunday, June 4, 2017 at the Hospice House in South Bend, Indiana.
Bud Strang was actually born on April 18, 1926 to Dolph Raymond Strang and Lila Gladys (Miller) Strang, in Tyner, Indiana. His country birth was erroneously recorded several days after his birth as April 19, 1926, his official birth date discovered by family many years later.
He lived most of his life in Marshall County, Indiana. As a boy he had paper routes in Tyner and weeded onions to be sold in the family grocery store, also in Tyner. He told stories of trying to manage their work mules, Dan and Bonnie. He graduated from Tyner High School in 1944. He enlisted in the United States Navy but was drafted into the United States Army immediately after high school. He served in WWII from August 22, 1944 to July 8, 1946 and also served in the Korean Conflict from January 30, 1951 to August 30, 1951 but was not deployed to Asia.
He married his high school sweetheart, Donnabelle Johnson on August 23, 1947. They had three children. They enjoyed sixty-five years together. They felt fortunate to winter in Sebring, Florida for twenty-three years.
Budâ€™s lifetime career was in the family construction business. He was co-owner of Strang Construction Company and Strang and Associates. They manufactured brickcrete, designed and built homes, churches, and countless remodeling projects in the Marshall County area.
He is survives by his son, Michael (Kris) Strang, and daughter, JoEllen (Tom) Hess; six grandchildren: Chad Strang, Angie (Matt) Moller, Andy (Francine) Patterson, April (Brian) Gallagher, Stewart Riddiough and Steven Riddiough; along with five great-grandchildren: Michael, Kaleigh, and Joshua Moller, Grace and Claire Gallagher, and one step great-grandson, Nicholas Granered. He is also survived by his sister, Shirley Zartman, sister-in-law, Agnes Strang, and many beloved nieces, nephews, and great-nieces and great-nephews.
He was preceded in death by his wife, Donnabelle Strang, by their son, Richard Strang, parents, Dolph and Lila Strang, brother, Durwood Strang, and niece, Pamela Strang.
Friends may visit with the family from 4 â€“ 7 p.m. on Wednesday, June 7, 2017 in the Johnson-Danielson Funeral Home, 1100 North Michigan Street, Plymouth. The Tyner I.O.O.F. Lodge #821 will be providing a service at 7:00 PM in the funeral home. Visitation will resume on Thursday beginning at 10:00 AM until time of service.
Funeral services will take place at 11:00 a.m. on Thursday at the funeral home with Pastor Denny Soule officiating.
Burial will follow in the Tyner Cemetery with Military Honors provided by members of the American Legion Post 27, Veterans of Foreign War- Marshall County Post 1162 and Disabled American Veteran Chapter 42.
Memorial contributions may be directed to the Tyner United Methodist Church, 4503 French Street, Plymouth, Indiana 46563 or the South Bend Hospice House, 111 Sunnybrook Court, South Bend, Indiana 46637.