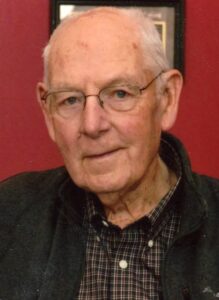 He was born on a dairy farm in Marshall County near Plymouth to Ben and Nellie (Davenport) Smith on January 28, 1925. He was a graduate of Tyner High School and attended South Bend College of Commerce (Michiana Business College) and IUSB.

On September 8, 1945, he was united in marriage to the former Ella Stull. They enjoyed hosting numerous family celebrations, and he loved attending their grandchildren’s sporting events.

Earl farmed, worked construction, and founded and was president of Smith Farm Stores, Inc. He served on John Glenn School Board from 1962-1975, the Polk Township election board for many years and was a member of Gideons International.

He was a Past Master of the former Walkerton Masonic Lodge and a member of the North Liberty Lodge, an honorary thirty third degree Scottish Rite Mason and a member of Orak Shrine where he served many years on the Children Transport Team, transporting children to and from Shriner’s Children hospitals.

Earl enjoyed working in the garden and playing golf; and as an airplane enthusiast, piloted a Cesna 175.

As a member of Teegarden United Methodist Church, he served as Sunday School superintendent for many years, president of the Board of Trustees, and Lay Leader. More recently he attended Pine Creek Church of the Brethren.

Visitation will be held on Sunday, November 7, 2021, from 1-3 p.m. at Pine Creek Church of the Brethren, 25075 Stanton Road, Walkerton. A Masonic Ritual will be performed at 3 p.m. followed by funeral services.

Burial will be in the Morris Cemetery, Plymouth.

Memorial contributions can be made to Pine Creek Church of the Brethren, 25075 Stanton Road, North Liberty, IN 46554 or Shriners Hospitals for Children 3848 Frontage Road, Michigan City, IN 46360.