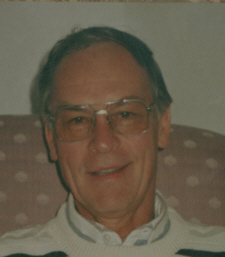 Earle Jansma, 77, of 12129 11th Road, died of natural causes in Miller’s Merry Manor, Plymouth, at 1:34 a.m. on Friday, July 15, 2005. Earle was born in Hammond, Ind., on July 11, 1928. He was the son of Peter and Delia VanWeeldon Jansma. He graduated from Hammond High School.
Earle served in the United States Army.
On September 9, 2000, Earle and Diana Steinman were married in Walhalla, South Carolina.
He was originally a bridge builder and highway constructor in Indiana and Ohio. He was most recently the owner/operator of the J&M Gravel Company, co-founded with his father, Peter, in 1961.
He was an avid golfer and traveler. He retired in 1994 and moved to South Carolina to play golf; he lived there for eight years,
He was a former member of the Plymouth Country Club and the Oconee Country Club in Seneca, South Carolina.
Earle is survived by his wife, Diana, and by his daughter, Anne Marie and George Pappas, St. Louis, Mo., and his son, Alan and Tammy Jansma, Plymouth, Ind.
A step-daughter, Lea Seniff, Bourbon, Ind., and two step-sons, Todd Feldman, Plymouth and Bret and Erin Feldman, Etna Green, Ind., survive as well.
He is also survived by six grandchildren; Nicholas Pappas, Ashli Seniff and Kody Seniff, Dylan Seniff Kaleb Feldman, Morgan Feldman. A brother and a sister survive him as well they are; Calvin and Barbara Jansma, Wildwood, Fla., Dolores and Harry Fagan, Clarkston, Mich.
Earle was preceded in death by his parents and a brother, Robert Earle Jansma.
Friends will be welcomed to call on Saturday, July 23, 2005, from 1 to 4 p.m. at the Johnson-Danielson Funeral Home, 1100 N. Michigan St., Plymouth, Ind.
Funeral services in the funeral home will follow visitation at 4 p.m. The Rev. Sam Boys, will officiate.
Memorial gifts may be made to the Parkinson’s Disease Foundation or the Epilepsy Foundation in Earle’s memory.