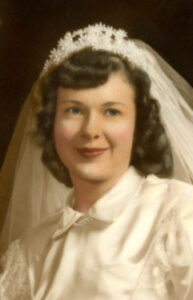 Eava June Scott, 84, passed away at 3:34 p.m. on Tuesday, December 30, 2014 at Wynnfield Crossing Assisted Living Center in Rochester, Indiana. She was a resident of Culver most of her life.
Born on June 18, 1930 in Culver, Indiana, Eava was the daughter of Darl C. and Dorothy F. (Vankirk) Voreis. She graduated from Culver High School and then graduated from the South Bend Beauty College.
She operated her own beauty shop for 10 years. Eava then began working for St. Joseph Regional Medical Center in Plymouth as a clerk and nurses assistant always with a pleasant resolve. She served for 25 years until her retirement in 2002.
On July 23, 1949, Eava married Walter S. Scott. He would precede her in death in April of 1976.
She was a member of the Tyner Rebekah Lodge #803 and was a past State officer.
Eava is survived by her three children: Pamela D. (Michael) Grau of Louisville, KY, Shari L. (John) Miller of Plymouth, and Rick S. (Angela) Scott of Bremen; her grandchildren: Becky Grau, and Kenneth Banks, Michael Banks, Ryan Scott; her great-grandchildren: Ricky, Dylan, McKenzie, Kassidy, Scotty and Liam; her brother, Louis R. Voreis of Plymouth and sister-in-law Susie of Plymouth.
She was preceded in death by her husband, parents and brother, Darl C. Voreis Jr.
Visitation will be held on Friday, January 2, 2015 from 11a.m. – 1p.m. in the Johnson-Danielson Funeral Home, 1100 N. Michigan St., Plymouth. Services will follow at 1 p.m. that will include a Rebekah Memorial Rite.
Burial will follow in the Burr Oak Cemetery.
Memorial gifts may be made to the Tyner Rebekah Lodge 18260 4B Road, Walkerton, IN 46574.