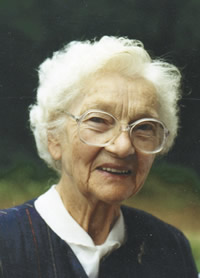 Edith A. Enos, 108, of Upas Road, passed away in her home at 9:07 a.m. on Saturday, June 29, 2013.
On April 26, 1905 in Plymouth, another baby daughter was added to the Boys family and Samuel E. and Florence R. Boys named her Edith Alice. She graduated from Washington School in 1922 in Plymouth. She was a member of the debating team and sang with a girls’ quartet. She graduated in 1926 from the University of Wisconsin, Madison, with honors with a B.S. degree from the School of Education, Department of Physical Education. She then was employed at Texas University to teach women’s physical training. She taught there for three years then took a position as instructor of Physical Education at the University of California, Berkley, where she taught for two years. In 1931 she journeyed to Europe for nine months where she studied dancing then returned to the U.S. where she obtained a master’s degree in dance from the University of Wisconsin. She married Bertram Enos in 1933 and had four children Matthew, Jo Ann, Timothy and Catherine. She began her newspaper career in 1949 when Frank Stegman sold the Mishawaka Enterprise, Mishawaka, Indiana to Bertram and Edith Enos and Samuel E. Boys. Edith Boys Enos then took control of the paper in 1951. On April 29, 1966, because of the death of both of her parents, the founders of the Pilot News, The Pilot Company again had to reorganize by electing Eleanor Boys Blank as President, Edith Boys Enos, Vice-President and Michael D. Boys as Secretary-Treasurer.
After 28 years in the newspaper business Edith retired and built a home on 40 acres in West Township near Ancilla Domini. Every Wednesday she would walk from her home to Ancilla and visited with the Sisters at the Mother House for awhile then walk back home. While taking these walks she would carry a pair of binoculars with her as she was an avid bird watcher. Once a year she would travel, visiting her son in California and her remaining two sisters in New Mexico and Indianapolis.
She is survived by her son Matthew (Marci) Enos of Glenview, Illinois, and her daughter, Catherine (Larry) Mandt of Madison, Wisconsin. Preceding her in death were her parents Samuel E. and Florence R. Boys, a brother, Alfred R. Boys, three sisters Beatrice Boys Rinde, Eleanor Boys Blank and Elizabeth Boys Ellis; a daughter, JoAnn Enos Stone and a son, Timothy Enos. She had 11 grandchildren, five great-grandchildren and two nieces and five nephews. Memorial Services celebrating the life of Edith Boys Enos will be held Saturday, July 6, 2013 at 2:30 p.m. at Moon Tree Gallery at Ancilla with the Rev. Dr. Samuel A. Boys officiating.