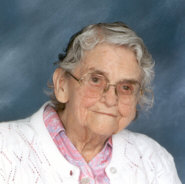 Edith E. Harner, 94, 7165 S.R. 17, Plymouth, died of natural causes at 3:04 p.m. on Wednesday, October 20, 2004, in Saint Joseph Regional Medical Center, Plymouth.
Born in Bremen on June 5, 1910, Edith was the daughter of Floyd and Mabel Heckaman Huff.
She graduated from Bremen High School with the class of 1929.
On October 22, 1932, in Bremen, Edith and Leander “Lee” Harner were married. Lee died on September 22, 1972.
At one time, she worked in the Plymouth canning factory, but her major service was taking care of numerous elderly people in the Marshall County area. She would go to their homes and give kind, loving care around the clock.
She also helped out on her and Lee’s farm and when her father was ill, she would drive the school bus on his route.
She loved flowers and grew many varieties, year round.
At the age of 90, Edith was still mowing the lawn. She enjoyed traveling and even in her ninth decade explored caves with her family members.
She was a member of the Riverside United Brethren Church, Bremen and also attended the Shiloh Wesleyan Church and the House of Prayer.
Edith is survived by her two sons, both of Plymouth: Warren and Barbara Harner and Larry Harner.
Eight grandchildren survive as well. They are: Pam and John DePoy, Knox; Brenda and Don Dalton, LaPorte; Lana Harner, Plymouth; Lonnie and Barbara Harner, Plymouth; Lynn and Bridget Harner, Plymouth; Michelle and Daniel Large, Plymouth; Scott and Janet Harner, Plymouth and Lisa and Joseph Baughman, Culver, Ind.
Thirteen great- grandchildren also survive.
Two brothers, Gene and Patricia Huff, Plymouth and Jacob and Louise Huff, Hendersonville, Tenn., survive as well.
Edith was preceded in death by her parents, her husband, a son, Arnold, and 5 brothers Dale, Kenneth, George, Virgil and an infant brother, Carl. A daughter-in-law, Lela has died also.
Friends are invited by the family to share their memories and celebrate the life of Edith from 2 to 7 p.m., Friday, October 22, 2004, in the Johnson-Danielson Funeral Home, 1100 N. Michigan St., Plymouth.
Funeral service for Edith will be at 11 a.m. on Saturday, October 23, 2004, at the Shiloh Wesleyan Church, 10532 4B Rd., Plymouth. The Rev. John Perkinson, pastor of the church and the Rev. Ronald D. Humphrey, pastor of the House of Prayer, and her brother, Jacob Huff will officiate.
Burial will be in Mt. Pleasant Cemetery, Bourbon Ind.
Gifts in memory of Edith may be given to American Cancer Society